The Lightest Object in the Universe: A Novel (Paperback) 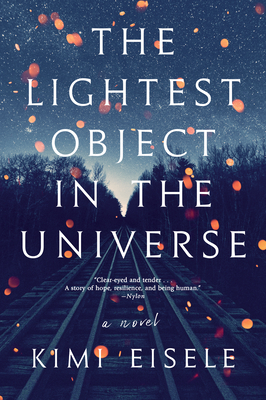 “Instead of focusing on what is dark and terrifying like most dystopian novels, love lights the way in The Lightest Objects in the Universe. Following a cataclysmic event, Beatrix is working with her neighbors to rebuild their community, while former school principal Carson travels across the country on foot to reach the woman he knows is his soul mate. Their individual stories are trying yet hopeful and celebrate the best parts of humanity. Highly recommended for book clubs and fans of dystopian literature.”
— Beth Seufer Buss, Bookmarks, Winston-Salem, NC

“Not many survive a pandemic that plunges humankind’s technology into darkness, and those who make it must learn how to remake the world and thrive. Two such persons are at the heart of this story: Beatrix, an activist in California, and Carson, a school principal in New York. Before the crash, they had begun a tentative long-distance love affair. Now, only faith in each other keeps them together. Carson embarks on a perilous cross-country journey to Beatrix as she begins to rebuild her community. Threatening everything is a dangerous gang of disaffected kids and a self-proclaimed prophet who claims the keys to salvation. The Lightest Object in the Universe is thought-provoking and truly entertaining. Post-apocalyptic fiction fans will not be disappointed.”
— Laura Simcox, Sunrise Books, High Point, NC

“[This] might be the most optimistic post-apocalyptic story ever written. It’s Sleepless in Seattle meets Station Eleven.” —The A.V. Club

Carson is on the East Coast when the electrical grid goes down. Desperate to find Beatrix, a woman on the West Coast who holds his heart, he sets off along a cross-country railroad line, where he encounters lost souls, clever opportunists, and those seeking salvation. Meanwhile, Beatrix and her neighbors begin to construct a cooperative community, working to turn the end of the world into the possibility of a bright beginning.

Without modern means of communication, will Beatrix and Carson be able to find their way to each other? The answer may lie with one fifteen-year-old girl, whose actions could ultimately decide the fate of the lovers.

The Lightest Object in the Universe is a moving story about adaptation and the power of community, imagining a world where our best traits, born of necessity, can begin to emerge.

Kimi Eisele is a writer and multidisciplinary artist. Her writing has appeared in Guernica, Longreads, Orion Magazine, High Country News, and elsewhere. She holds a master’s degree in geography from the University of Arizona, where in 1998 she founded You Are Here: The Journal of Creative Geography. She has received grants from the Arts Foundation of Southern Arizona, the Arizona Commission on the Arts, the Kresge Foundation, and the National Endowment for the Arts. She lives in Tucson and works for the Southwest Folklife Alliance. This is her first novel.

“In The Lightest Object in the Universe, author Kimi Eisele explores how humanity would have to evolve, relying on hope and love to ultimately sustain humankind.”
—The Associated Press

“A worthy addition to the realm of speculative fiction . . . More than just standard techno-challenged-humanity-rendered-atavistic fare, this is a love story. More accurately, the quest for love and its potential in a world demanding to be rebuilt.”
—The Millions

“Clear-eyed and tender . . . an enlightening, though never precious perspective on what it means to rebuild something, rather than just wallow in destruction. It's a story of hope, resilience, and being human.”
—Nylon

“It’s Sleepless In Seattle meets Station Eleven . . . the leisurely chapters are full of beauty, the characters are layered and nuanced, and the plot still moves at a faster clip than Charles Frazier’s Cold Mountain, another Odyssean novel about lovers separated by harsh geography. To be fair, there are plenty of horrors in Eisele’s version of the apocalypse . . . But unlike The Road, The Lightest Object is mostly interested in the survivors who are kind to one another. If that sounds naïve, maybe Cormac McCarthy made us all too cynical.”
—The A.V. Club

“A near-future apocalypse forms the backdrop for an intense, moving romance in Eisele’s smart debut . . . Fans of Station Eleven will particularly enjoy this hopeful vision of a postapocalyptic world where there is danger, but also the possibility for ideas to spread, community to blossom, and people to not just survive, but thrive.”
—Publishers Weekly

“This is Charles Frazier’s Cold Mountain crossed with Emily St. John Mandel’s Station Eleven. Filled with luminous writing and messages of love and hope, this story will motivate everyone to sharpen their ham radio skills.”
—Library Journal

“A compellingly realistic depiction of the world after the collapse of civilization, although at its heart, it is a love story told in the vein of Cold Mountain . . . The Lightest Object in the Universe is an intriguing and engrossing debut novel that will leave readers thinking about their own ability to survive, their own capacity for love, and their willingness to face catastrophe with hope.”
—New York Journal of Books

“Kimi Eisele’s first novel is a love story set in a landscape where everything (government, history, infrastructure) has collapsed—except our need for one another and the struggle to persevere. In such a world, love may be on the run, but it can still  be a transforming force. What’s required is a kind of faith: in ourselves, in one another, in a future that is no more or less uncertain than it has always been. The experience of humanity, in other words, which Eisele brings to every page of this deeply moving narrative.”
—David L. Ulin, author of Sidewalking: Coming to Terms with Los Angeles

This feature require that you enable JavaScript in your browser.
END_OF_DOCUMENT_TOKEN_TO_BE_REPLACED

END_OF_DOCUMENT_TOKEN_TO_BE_REPLACED

This feature require that you enable JavaScript in your browser.
END_OF_DOCUMENT_TOKEN_TO_BE_REPLACED