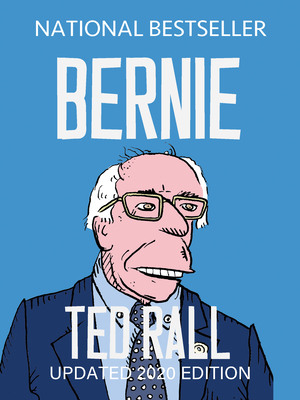 The only graphic novel-style biography of the Presidential Contender.

National Bestseller updated for 2020 with 24 new pages taking Bernie into the 2020 election.

Ted Rall's Bernie explores the personal and political development of a man who burst onto the national stage in 2015—rallying Americans and shaking up the Democratic Party—after decades in Congress. He's leading the polls, but win or lose the Democratic nomination for 2020, he's setting a new benchmark for a revived progressivism within a party that has rejected it for half a century. Insightful, funny, and accessible, this biography-in-graphic-novel-form of the presidential candidate explains both his early life and political rise, but also shows the broader history (and decline) of progressive democratic values in the U.S. until Bernie brought them back to the forefront of the political conversation.

Twice the winner of the Robert F. Kennedy Journalism Award and a Pulitzer Prize finalist, TED RALL is a radical syndicated political cartoonist, opinion columnist, graphic novelist, and occasional war correspondent whose work has appeared in hundreds of publications, including the New York Times, Washington Post, Village Voice, and Los Angeles Times. For Seven Stories Press, he is the illustrator of the full-length comic Billionaires & Ballot Bandits: How to Steal an Election in 9 Easy Steps (2012), written by Greg Palast, and the author and illustrator of The Book of Obama (2012), The Anti-American Manifesto (2010), and After We Kill You, We Will Welcome You Back as Honored Guests (Hill and Wang 2014). His most recent books are Snowden (2015), Bernie (2016, 2020), Trump (2016), and Francis, the People's Pope (2018).

"Rall’s illustrated work, in the same format as his acclaimed Snowden, is an illuminating, clear-headed, straight-shooting argument on why American voters should support and elect Senator Bernie Sanders to president. ... In the months leading up to the Democratic Convention, this is an essential survey and solid political ammunition for Sanders supporters, with appeal to politically minded readers." —Publishers Weekly

"More than a campaign biography, this graphic narrative traces the decline and possible resurgence of liberalism within the Democratic Party.... An effective, if unapologetically partisan, primer on a strong voice from the left to counter the Democrats' rightward shift." —Kirkus Reviews

"What sets this book apart is not that it's a cartoon, but that it's an argument for placing Bernie Sanders in a particular position in U.S. history, namely as the restoration of liberalism to a Democratic Party that hasn't seen it since the McGovern campaign. In fact, a huge chunk of the book is not about Bernie at all, but is a history of the rightward drifting of the Democratic Party over the decades. Another big chunk is a history of Bernie's childhood and career. Both of these sections are well done." —David Swanson, executive director, World Beyond War

This feature require that you enable JavaScript in your browser.
END_OF_DOCUMENT_TOKEN_TO_BE_REPLACED

END_OF_DOCUMENT_TOKEN_TO_BE_REPLACED

This feature require that you enable JavaScript in your browser.
END_OF_DOCUMENT_TOKEN_TO_BE_REPLACED