Affliction: Growing Up with a Closeted Gay Dad (Paperback) 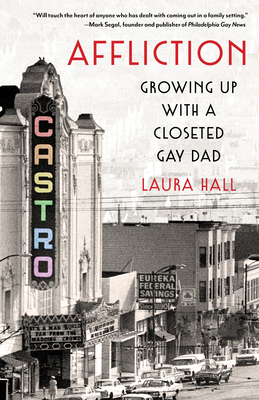 In 1937, at the age of nineteen, Ralph Hall, suicidal, revealed his sexual orientation to his grandmother, knowing she would comfort him. He was out for three years afterwards, until an indiscretion sent him back into the closet. At twenty-four, while in the army, he met and married Irene. The couple made their home on the San Francisco Peninsula and had four children. Ralph was an attentive husband and father--albeit with an intense interest in interior design, flower arranging, and fine objects--and a diligent worker who rose to payroll accountant at Standard Oil. It wasn't until 1975 that Ralph came out to his middle daughter, Laura, telling her that he had once considered his sexuality an aberration, an affliction. She was shocked, as the possibility her father might be gay had never crossed her mind. Irene had known Ralph's secret for eighteen years, but the two remained married until she died. It was only then that this charismatic man and devoted father, by now in his eighties, could freely express his authentic, gay self. Here, Laura paints a vivid and honest portrait of her beloved father and the effect his secret had on her own life.

This feature require that you enable JavaScript in your browser.
END_OF_DOCUMENT_TOKEN_TO_BE_REPLACED

END_OF_DOCUMENT_TOKEN_TO_BE_REPLACED

This feature require that you enable JavaScript in your browser.
END_OF_DOCUMENT_TOKEN_TO_BE_REPLACED