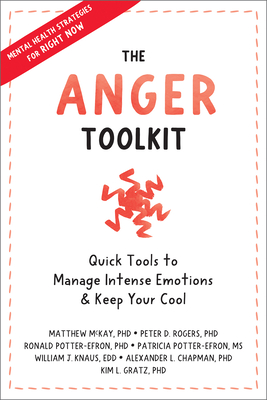 A quick-relief guide for calming anger in the moment--just when you need it most.

Do you struggle with problem anger? If so, you are far from alone. Sometimes anger can be a helpful emotion. It pushes us to stand up for ourselves or the people we care about--or to advocate for a cause we believe in. But sometimes, anger can become intense and overwhelming, and lead us to act in destructive or harmful ways--impacting relationships, work, and our health. So, how can you take charge of your anger before it gets the best of you?

If you're ready to stop letting anger rule your life, this easy-to-use guide has everything you need to stay calm, cool, and in charge of your emotions.

Matthew McKay, PhD, is a professor at the Wright Institute in Berkeley, CA. He has authored and coauthored numerous self-help books, including The Dialectical Behavior Therapy Skills Workbook, Self-Esteem, and Couple Skills, which have sold more than four million copies combined. He received his PhD in clinical psychology from the California School of Professional Psychology, and specializes in the cognitive behavioral treatment of anxiety and depression. Peter Rogers, PhD, (1941-2004), was administrative director of Haight Ashbury Psychological Services. He coauthored When Anger Hurts, The Divorce Book, The Anger Control Workbook, and The Community Building Companion.Ronald T. Potter-Efron, MSW, PhD, is a psychotherapist in private practice in Eau Claire, WI; who specializes in anger management, mental health counseling, and the treatment of addictions. He is author of Angry All the Time and Stop the Anger Now, and coauthor of The Secret Message of Shame. Patricia S. Potter-Efron, MS, is a clinical psychotherapist at First Things First Counseling Center in Eau Claire, WI. She is coauthor of Letting Go of Shame and The Secret Message of Shame, as well as several professional books on anger and shame. William J. Knaus, EdD, is a licensed psychologist with more than forty-six years of clinical experience working with people suffering from anxiety, depression, and procrastination. He has appeared on numerous regional and national television shows, including The Today Show, and more than one hundred radio shows. His ideas have appeared in national magazines such as U.S. News & World Report and Good Housekeeping, and major newspapers such as The Washington Post and the Chicago Tribune. He is one of the original directors of postdoctoral psychotherapy training in rational emotive behavior therapy (REBT). Knaus is author or coauthor of more than twenty-five books, including The Cognitive Behavioral Workbook for Anxiety, The Cognitive Behavioral Workbook for Depression, and The Procrastination Workbook.Alexander L. Chapman, PhD, RPsych, is professor and coordinator of the clinical science area in the psychology department at Simon Fraser University in Canada, as well as a registered psychologist and president of the DBT Centre of Vancouver. Chapman directs the Personality and Emotion Research and Treatment laboratory, where he studies the role of emotion regulation in borderline personality disorder (BPD), self-harm, impulsivity, as well as other related issues. His research is currently funded by major grants from the Canadian Institutes of Health Research. Chapman has received the Young Investigator's Award from the National Education Alliance for Borderline Personality Disorder (NEABDP), the Canadian Psychological Association's Scientist Practitioner Early Career Award, and a Career Investigator award from the Michael Smith Foundation for Health Research. He has coauthored ten books, three of which received the 2012 Association for Behavioral and Cognitive Therapies' Self-Help Book Seal of Merit Award. Board certified in cognitive behavioral therapy (CBT) (Canadian Association for Cognitive and Behavioral Therapies) and dialectical behavior therapy (DBT) (DBT(R)-Linehan Board of Certification), Chapman cofounded a large psychology practice, and regularly gives workshops and presentations to clinicians and community groups both nationally and internationally. He also has been practicing martial arts, Zen, and mindfulness meditation for many years, and enjoys cooking, hiking, skiing, and spending time with his wife and sons. Kim L. Gratz, PhD, is professor and chair of the department of psychology at the University of Toledo. Gratz directs the Personality and Emotion Research and Treatment laboratory, in which she conducts laboratory and treatment outcome research focused on the role of emotion dysregulation in the pathogenesis and treatment of BPD, self-injury, and other risky behaviors. Gratz has received multiple awards for her research on personality disorders, including the Young Investigator's Award from the NEABPD in 2005, and the Mid-Career Investigator Award from the North American Society for the Study of Personality Disorders in 2015. She has been continuously funded since 2003 (with continuous federal funding as principal investigator since 2008), and has authored more than 145 peer-reviewed publications and six books on BPD, self-injury, and DBT.

This feature require that you enable JavaScript in your browser.
END_OF_DOCUMENT_TOKEN_TO_BE_REPLACED

END_OF_DOCUMENT_TOKEN_TO_BE_REPLACED

This feature require that you enable JavaScript in your browser.
END_OF_DOCUMENT_TOKEN_TO_BE_REPLACED