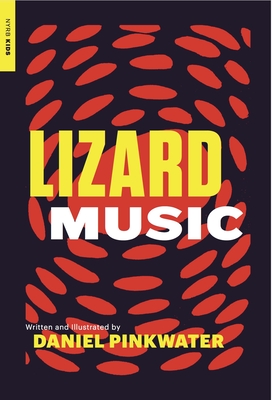 An ALA Notable Book

Kids ages 9-12 will “delight in [the] oddness” of this Home Alone-style tale set in the 1970s—from a prolific children’s author who captures “a magic that’s not like anyone else’s” (Neil Gaiman).

With Victor’s parents out of town, he is free to investigate the mysterious lizard musicians who have recently appeared on TV . . .

Things Victor loves: pizza with anchovies, grape soda, B movies aired at midnight, the evening news. And with his parents off at a resort and his older sister shirking her babysitting duties, Victor has plenty of time to indulge himself and to try a few things he’s been curious about. Exploring the nearby city of Hogboro, he runs into a curious character known as the Chicken Man (a reference to his companion, an intelligent hen named Claudia who lives under his hat).

The Chicken Man speaks brilliant nonsense, but he seems to be hip to the lizard musicians (real lizards, not men in lizard suits) who’ve begun appearing on Victor’s television after the broadcast of the late-late movie. Are the lizards from outer space? From “other space”? Together Victor and the Chicken Man, guided by the able Claudia, journey to the lizards’ floating island, a strange and fantastic place that operates with an inspired logic of its own.

Daniel Pinkwater has written about one hundred books, many of them good. Lizard Music was almost the first one he wrote, and remains his personal favorite. It is entirely his own work, and the story that it was discovered as a manuscript inserted in a bale of banana leaves, probably to increase the weight, is merely legend, and without foundation in fact.

“Pinkwater is the uniquest. And so are his books. Each uniquer than the last . . . A delight in oddness. A magic that’s not like anyone else’s.”
—Neil Gaiman

“No author has ever captured the great fun of being weird, growing up as a happy mutant, unfettered by convention, as well as Pinkwater has . . . It’s one of those books that, in the right hands at the right time, can change your life for the better and forever.”
—Cory Doctorow, BoingBoing.net

“Lizard Music is . . . funny, properly paranoid, shot through with bad puns and sweet absurdities, and all about a baffled kid intent on tracking reality (as slippery as lizards) in a media-spooked milieu.”
—Kirkus Reviews (starred review)

“Wildly imaginative . . . This is a natural high.”
—Booklist, starred review

“A writer for smart kids . . . Pinkwater writes for, and about, people who are not ashamed to look at life a little differently.”
—Wired

This feature require that you enable JavaScript in your browser.
END_OF_DOCUMENT_TOKEN_TO_BE_REPLACED

END_OF_DOCUMENT_TOKEN_TO_BE_REPLACED

This feature require that you enable JavaScript in your browser.
END_OF_DOCUMENT_TOKEN_TO_BE_REPLACED