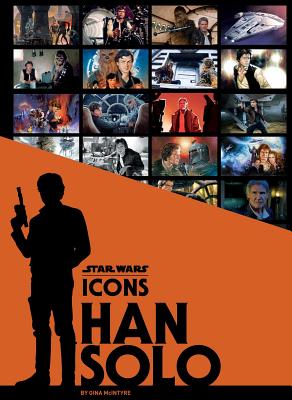 Discover the incredible story behind the creation and legacy of one of Star Wars’ most beloved characters with Star Wars Icons: Han Solo.

Smuggler. Rogue. Hero of the Rebellion. Scruffy-looking nerf herder. Han Solo has been called all these things and more since making his debut in the original Star Wars film back in 1977. Four decades later, the irrepressible Solo continues to be one of the most iconic and enduring elements of the saga.

Star Wars Icons: Han Solo covers the character’s entire journey, from his genesis in George Lucas’s first drafts of Star Wars to Harrison Ford’s iconic performances in the original three films and The Force Awakens, and the character’s rebirth in Solo: A Star Wars Story. The book also takes an in-depth look at Solo’s role in the Star Wars expanded universe, through novels, comics, video games, and more, and the indelible impression the character has made on pop culture.

Comprehensive and revelatory, this is the definitive book for Han Solo fans across the galaxy.

Gina McIntyre is the New York Times best-selling author of Stranger Things: Worlds Turned Upside Down. Other award-winning books include Guillermo del Toro's The Shape of Water: Creating a Fairy Tale for Troubled Times, Star Wars Icons: Han Solo, Game of Thrones: The Costumes and more. A longtime entertainment journalist, her work has appeared in the Los Angeles Times, Entertainment Weekly and The Hollywood Reporter.

"Star Wars Icons: Han Solo is a beautiful coffee table book laid out with interesting facts, stories and interviews. The pictures selected are unique and fun to see, especially for someone who traveled with the history of Lucasfilm as I did."
— Howard Kazanjian, Producer, Return of the Jedi/Executive Producer, Raiders of the Lost Ark

"This book is an amazing, in depth approach to the character. If you are any kind of Solo fan, this is the seminal work for you."
— Channel Star Wars

"Insight Editions and Gina McIntyre spared nothing, and this is the essential book for Han Solo fans. I imagine you’d be hard pressed to find a Star Wars fan it didn’t impress."
— Star Wars News Net

"Star Wars Icons: Han Solo captures the magic of the character from Han Solo’s beginning to the latest iteration of him played by Alden Eichenreich in Solo: A Star Wars Story."


— Dork Side of the Force

"I cannot gush about this book enough, it's phenomenal."

"I was getting goosebumps flipping through the artwork"


— Journals of The Jedi

"There aren’t enough words to gush over this book"

"Literally the best book I've ever bought."
— The Wampa's Lair

"It is really an astounding book. Definitely worth adding to your library."
— Mousetalgia

"Icons is virtually bursting at the seams with cool inserts to examine and display. Combine this with all the great information it delivers, and the book is definitely more than worth the price. It’s something fans will get a kick out of while collectors will have plenty of reason to come back to long after they’ve read it all."
— Cinelinx

This feature require that you enable JavaScript in your browser.
END_OF_DOCUMENT_TOKEN_TO_BE_REPLACED

END_OF_DOCUMENT_TOKEN_TO_BE_REPLACED

This feature require that you enable JavaScript in your browser.
END_OF_DOCUMENT_TOKEN_TO_BE_REPLACED