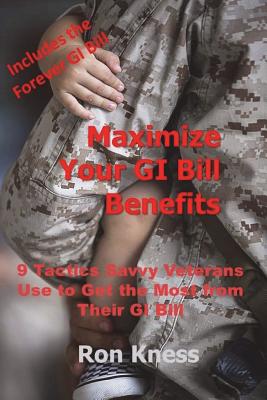 By Ron Kness
$24.95
Not in-stock currently- expect arrival in 1-14 business days
(This book cannot be returned.)

GI Bill benefits are a precious commodity that should not be wasted. After all, if you are like most servicemembers or veterans you only have 36 months to use - 48 months if you are fortunate enough to have two or more GI Bills (which many veterans have).
The more I work with the GI Bills, the more both surprised and frustrated at the amount of mis-information there is on the Internet concerning GI Bill benefits. Because of this, I hear from a number of veterans who have ended up mismanaging and squandering their GI Bill benefits - with nothing to show for their hard-earned benefit.
I also constantly see the same, or variations of the same questions, asked over and over again, so my intent with this guide is three-fold: - Put some of the mis-information to rest. - Provide honest advice as to how best to use your GI Bill benefits. - Provide some ways veterans can use to shorten their time to a degree.
As part of the how-to-use-benefits advice, I have included 9 savvy tactics veterans can use to squeeze every drop of value from their GI Bill benefits. After years of exhaustive research and experience working and using the GI Bill myself, I have finally compiled this comprehensive guide (to include the new Forever GI Bill) that shows you the GI Bill facts and ways you can use to best use your GI Bill(s).

Mr. Kness retired in November 2007 as a Senior Noncommissioned Officer after serving 36 years of service with the Minnesota Army National Guard of which 32 of those years were in a full-time status along with being a traditional guardsman. As a full-time Guardsman, Mr. Kness last served as the J1 Sergeant Major for the Minnesota Army National Guard. He was tasked with the supervision of the Military Personnel Services Section of which one section was the Education Branch. As a traditional guardsman, Mr. Kness most recently served as the 34th "Red Bull" Infantry Division Command Sergeant Major before retiring. Before this last assignment, Mr. Kness served as the Command Sergeant Major for the 34th Infantry Division Support Command (DISCOM) and the 134th Signal Battalion. It was through these assignments and others that Mr. Kness gained extensive experience in leadership, management and oversight in the United States Army National Guard. During the three years and three months Mr. Kness served as the 34th "Red Bull" Infantry Division Command Sergeant Major, he spent much of his time traveling to operational theaters, active duty and National Guard posts, and military medical facilities working both soldier and family issues. Also during this assignment, Mr. Kness actively participated in nearly all pre-deployment, deployment and re-deployment ceremonies and programs both within and outside the state of Minnesota. It was during this time that Mr. Kness served as part of the Senior Leadership Team that developed and implemented Minnesota's "Beyond the Yellow Ribbon" program. In addition, Mr. Kness was a voting member of the Minnesota Army National Guard Senior Non-Commissioned Officer Consideration Board. This board, comprised of Brigade, Division and State-level CSMs, met once a quarter to review and provide input to the Adjutant General on Army National Guard personnel policies and regulations as they pertained to Minnesota soldiers. As far as education, Mr. Kness holds a BA in Business Administration from Metropolitan State University, Saint Paul, MN and is a graduate of the United States Army Sergeants Major Academy, El Paso, TX. Though retired, Mr. Kness takes pride in being able to still help military members and their families with GI Bill issues as they struggle to make sense of it all.

This feature require that you enable JavaScript in your browser.
END_OF_DOCUMENT_TOKEN_TO_BE_REPLACED

END_OF_DOCUMENT_TOKEN_TO_BE_REPLACED

This feature require that you enable JavaScript in your browser.
END_OF_DOCUMENT_TOKEN_TO_BE_REPLACED