Beyond Good and Evil: Prelude to a Philosophy of the Future. A book by philosopher Friedrich Nietzsche (Paperback) 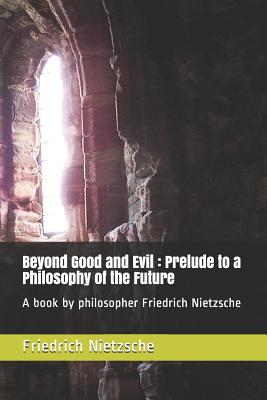 Beyond Good and Evil: Prelude to a Philosophy of the Future (German: Jenseits von Gut und B se: Vorspiel einer Philosophie der Zukunft) is a book by philosopher Friedrich Nietzsche that expands the ideas of his previous work, Thus Spoke Zarathustra, with a more critical and polemical approach. It was first published in 1886.In Beyond Good and Evil, Nietzsche accuses past philosophers of lacking critical sense and blindly accepting dogmatic premises in their consideration of morality. Specifically, he accuses them of founding grand metaphysical systems upon the faith that the good man is the opposite of the evil man, rather than just a different expression of the same basic impulses that find more direct expression in the evil man. The work moves into the realm "beyond good and evil" in the sense of leaving behind the traditional morality which Nietzsche subjects to a destructive critique in favour of what he regards as an affirmative approach that fearlessly confronts the perspectival nature of knowledge and the perilous condition of the modern individual.Of the four "late-period" writings of Nietzsche, Beyond Good and Evil most closely resembles the aphoristic style of his middle period. In it he exposes the deficiencies of those usually called "philosophers" and identifies the qualities of the "new philosophers": imagination, self-assertion, danger, originality, and the "creation of values". He then contests some of the key presuppositions of the old philosophic tradition like "self-consciousness", "knowledge", "truth", and "free will", explaining them as inventions of the moral consciousness. In their place, he offers the "will to power" as an explanation of all behavior; this ties into his "perspective of life", which he regards as "beyond good and evil", denying a universal morality for all human beings. Religion and the master and slave moralities feature prominently as Nietzsche re-evaluates deeply held humanistic beliefs, portraying even domination, appropriation and injury to the weak as not universally objectionable.