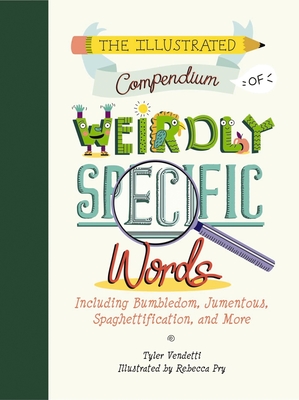 The Illustrated Compendium of Weirdly Specific Words is an illustrated dictionary of the 300+ most specific words in the English language, along with their definitions, roots, and (hilarious) usage quotes!

Have you ever been lying in your bed, surrounded by crumbs and wrappers, feasting on your fifth pop tart and thought, “I wish there was a word for this”? Well, there is! Accubationis - the practice of eating and drinking while lying down. The English language is populated by many words that have a regular place in everyday conversation, and The Illustrated Compendium of Weirdly Specific Words celebrates these words by featuring definitions, origins and usage, and coupling illustrations. Words include:

Badling (noun) - a group of ducks.
Crapulence (noun) - sickness resulting from eating too much.
Guddle (verb) - fishing only with your hands.
Kaiju (noun) - A film genre characterized by giant, terrifying monsters.
Slugabed (noun) - A lazy person who stays in bed late.
Wegotism (noun) - The excessive use of the word ‘we’.

With more than 300 insanely specific words, you’d think that you would know a few of them, right? Well, think again! We’re willing to wager that you don’t know a single one of these words! Unless, of course, you have a special interest in the smell of horse urine (the word for that particular odor is jumentuous). The Illustrated Compendium of Weirdly Specific Words not only captures these words through equally specific illustrations, it also tells you what they mean! And like so many great reference books before it, it is organized in alphabetical order, from aglet to zopissa.

Readers will close this book a little bit smarter than they were when they picked it up!

Tyler Vendetti is a writer and wannabe dog mom whose work focuses on pop culture, humor, and the trials and tribulations of twentysomething-hood. Author of The Illustrated Compendium of Ugly and Gross English Words, she boasts bylines in xoJane, TIME Online, Cosmopolitan magazine, HelloGiggles, The Penny Hoarder, and Thought Catalog, among others. Formerly of NBCUniversal and Warner Bros., she works as an entertainment assistant in Los Angeles. A comedy enthusiast with a flair for horror, Tyler can be found on Twitter @HeyThereFuture or at her home in Los Angeles, where she’s been hiding behind the couch the whole time.

This feature require that you enable JavaScript in your browser.
END_OF_DOCUMENT_TOKEN_TO_BE_REPLACED

END_OF_DOCUMENT_TOKEN_TO_BE_REPLACED

This feature require that you enable JavaScript in your browser.
END_OF_DOCUMENT_TOKEN_TO_BE_REPLACED