The Patch and The Stream Where the American Fell (Paperback) 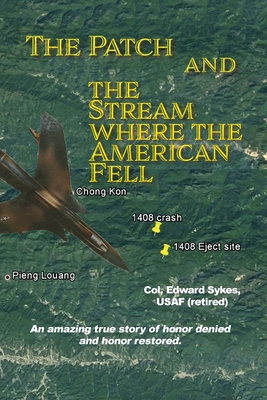 The last fighter pilot has already been born

The Patch represents a quest for an elusive symbol of manhood, daredevil ambition and the unwavering courage of fighter pilots from the Vietnam era. It also focuses on what happens when a smart and capable female intelligence officer enters the scene so long dominated by a fraternity of men. Two people are caught in a Catch 22 only to find that fate has a different plan for them, the timing of which is both tragic and ironic.

The Stream Where the American Fell delves into the author's quest to make good on our nation's promise to its warriors: "Leave No Man Behind." Still haunted by his friend's death in the Vietnam War 40 years earlier, Ed Sykes begins a new battle, to bring home the unrecovered remains of a fallen brother. He also seeks out the woman whose grief-stricken pleas had never been forgotten. The author races against time and the memories of those who'd witnessed that fateful day. Traveling through Laos, he is aided by his trusty guide Phet as they encounter interesting personalities including a village chief and a few shady characters hoping to monetize his single-minded quest.

This feature require that you enable JavaScript in your browser.
END_OF_DOCUMENT_TOKEN_TO_BE_REPLACED

END_OF_DOCUMENT_TOKEN_TO_BE_REPLACED

This feature require that you enable JavaScript in your browser.
END_OF_DOCUMENT_TOKEN_TO_BE_REPLACED