The Hands of the Prime Minister (Hardcover) 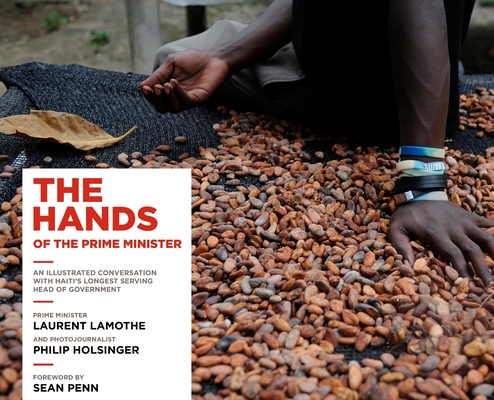 Hands of the Prime Minister is a unique chronicle of the special accomplishments of the former prime minister of Haiti, Laurent Lamothe, as captured by renowned photojournalist Philip Holsinger in 183 pages of interviews, field notes and personal observations - and over 165 magnificent black and white and color photos. Written in English, French, Spanish and Creole.

For a brief period, from 2012 to 2015, the emerging nation of Haiti experienced a season of extraordinary progress and increased security. Plagued by years of disasters, man-made and natural, this brief period marked a time of hope in Haiti. This was in a large part the result of a hands-on, inclusive government set up and managed by the young businessman turned Prime Minister Laurent Lamothe. He is the longest-serving Prime Minister in Haiti's modern history and his success is credited to his managerial approach to leading the troubled nation where he and his staff developed channels of communication with all levels of society, including the many-sided opposition.

This feature require that you enable JavaScript in your browser.
END_OF_DOCUMENT_TOKEN_TO_BE_REPLACED

END_OF_DOCUMENT_TOKEN_TO_BE_REPLACED

This feature require that you enable JavaScript in your browser.
END_OF_DOCUMENT_TOKEN_TO_BE_REPLACED