Trail to the Bruce: The Story of the Building of the Bruce Trail (Hardcover) 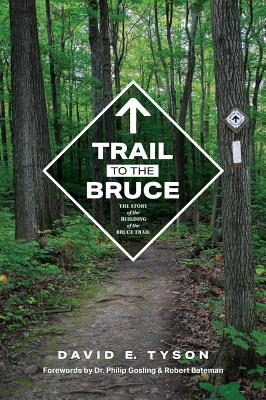 The Niagara Escarpment is the most significant land form in southern Ontario, designated a UNESCO World Biosphere Reserve in 1990. The Bruce Trail was conceived in 1960 in order to establish a conservation corridor containing a public footpath along the Escarpment. June 2017

marked the 50th anniversary of the official opening of the Bruce Trail.

This book is the story of the building of the Bruce Trail, the longest and oldest marked footpath in Canada. It runs along the Niagara Escarpment from Queenston Heights on the Niagara River to Tobermory at the tip of the Bruce Peninsula. The Trail system includes more than 890 km of

main Trail and over 400 km of associated side trails.

The Bruce Trail story is an outstanding example of citizens involved in the conservation of a major natural resource. The Trail is known around the world and is enjoyed by hundreds of thousands of hikers and walkers every year.

David Tyson is a management consultant living in Toronto. He has been actively involved in the Toronto Bruce Trail Club as a Hike Leader, Trail Captain and Director and served as President from 2003 to 2008. Since then, he has continued as a Director, Chair of the Land Management Committee

and Club representative to the BTC Land Securement Secretariat. He has written three books in his professional field of human resources; this is his first history book.

This feature require that you enable JavaScript in your browser.
END_OF_DOCUMENT_TOKEN_TO_BE_REPLACED

END_OF_DOCUMENT_TOKEN_TO_BE_REPLACED

This feature require that you enable JavaScript in your browser.
END_OF_DOCUMENT_TOKEN_TO_BE_REPLACED