The Strange Case of Harleen and Harley (Paperback) 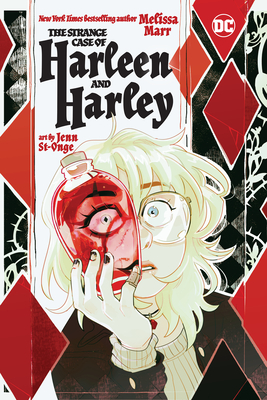 Harleen Quinzel is many things, a gymnast, anxious, broke…but the last thing anyone would call her is evil. Harley Quinn on the other hand…

“Good and evil are so close as to be chained together in the soul.”
- The Strange Case of Dr. Jekyll and Mr. Hyde by Robert Louis Stevenson

Harleen Quinzel is many things, a gymnast, anxious, broke…but the last thing anyone would call her is evil. Harley Quinn on the other hand…

When Harleen signs up to participate in a clinical research trial with her girlfriend, Pamela, the most she can hope for is extra cash in her wallet and a chance to get her anxiety under control. But what she gets instead are increasingly larger gaps in her memory and stolen mementos from some guy named Jack she’s never met.  Soon, Harleen discovers she’s sharing her life with Harley—a take-no-prisoners, who-cares-about attendance, maybe-we-oughtta-save-the-bunnies kind of girl. She is the opposite of Harleen in many ways. She is anarchy in a cute dress. And although she’s throwing Harleen’s life completely off track, maybe she ain’t so bad either…

New York Times bestselling author of Wicked Lovely, Melissa Marr, teams up with celebrated artist Jenn St-Onge to tell the story of a girl who will learn good and evil are not black and white (and red)…as long as she doesn’t get caught.

Melissa Marr writes for adults, teens, and children. Her novels & picture books have won awards, been translated into 28 languages, and been bestsellers in the NY Times, LA Times, USA Today, etc. Previously, she taught university lit and gender studies, worked an archaeology dig, and taught historical sword fighting. Sometimes she teaches in an M.F.A. program; often Melissa can be found in her kayak or roaming with her partner (Amber) and kids. http://www.melissamarrbooks.com/


Jenn St-Onge is the comic artist/bog witch behind Dynamite’s Nancy Drew & The Palace of Wisdom, IDW’s Jem & The Misfits, and Harper Collins' upcoming graphic novel, The Ojja-Wojja, along with a variety of cover work and guest spots for companies such as Dark Horse, Archie Comics, BOOM! Studios, Valiant Entertainment, Oni Press and many more.

A queer spoonie of perennial spookiness, Jenn can be found corporeally manifesting around Ottawa, Canada most days, where she lives with her husband, their black shuck (Bear), and more cats than she wishes to disclose.

This feature require that you enable JavaScript in your browser.
END_OF_DOCUMENT_TOKEN_TO_BE_REPLACED

END_OF_DOCUMENT_TOKEN_TO_BE_REPLACED

This feature require that you enable JavaScript in your browser.
END_OF_DOCUMENT_TOKEN_TO_BE_REPLACED