Atlas of Improbable Places: A Journey to the World's Most Unusual Corners (Unexpected Atlases) (Hardcover) 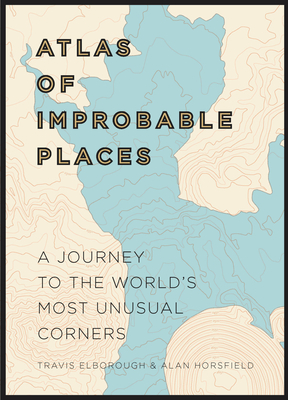 By Travis Elborough, Alan Horsfield (Maps by)
$29.99
Email or call for price.

Inspiring urban explorers and armchair travellers alike to consider a new way of understanding the world we live in, this unique atlas shows you the modern world from surprising new vantage points.

Hidden lairs beneath layers of rock, forgotten cities rising out of deserted lands and even mankind's own feats of engineering eccentricity lie in the most unusual of destinations. Go in search of the obscure and bizarre, the beautiful and estranged, taking in the defiant relics of ancient cities such as Ani, a once thriving metropolis lost to conquered lands, and the church tower of San Juan Parangaricuto, that miraculously stands as the sole survivor of a town sunk by lava. Through the labyrinths of Berlin and Beijing — underground realms dug for refuge, espionage and even, as Canada's Moose Jaw, used as the playground for gangsters trading liquor and money over cards — never forgetting the freaks and wonders of nature's own unusual masterpieces: the magical underground river shaped like a dragon's mouth in the Philippines and the floating world of Palmerston.

With beautiful maps and stunning photography illustrating each destination, Atlas of Improbable Places is a fascinating voyage to the world's most incredible destinations. As the Island of Dolls and the hauntingly titled Door to Hell — an inextinguishable fire pit - attest, mystery is never far away. The truths and myths behind their creation are as varied as the destinations themselves. Standing as symbols of worship, testaments to kingships or even the strange and wonderful traditions of old and new, these curious places are not just extraordinary sights but reflections on man's own relationship with the world around us.

Travis Elborough has been a freelance writer, author and cultural commentator for more than a decade now. His book include The Bus We Loved, a history of the Routemaster bus;The Long Player Goodbye, a hymn to vinyl records; and Wish You Were Here, a survey of the British beside the seaside. Elborough is a regular contributor to the Observer and the Guardian but has written for the Times, Sunday Times, New Statesman, the Oldie, TATE etc., BBC History magazine and Kinfolk among others and frequently appears on BBC Radio 4 and Five Live.

ALAN HORSFIELD has over thirty years' experience as a cartographer. Having started his career at the Ordnance Survey of Great Britain, he has created artwork for many publications, most recently as chief cartographer for Reader's Digest World Atlas. Alan lives in Hampshire with his wife and three children.

“ ‘A compendium of unlikely, curious and plain odd locales’ seems something of a natural habitat for Travis Elborough, a cultural historian with a touch of the Betjemans and a lick of the Meades about him. From deserted mining towns in Nagasaki to the ever-decreasing Holland Island in Maryland, he and cartographer Horsfield do us a great service: making the world feel bigger.”
—Monocle magazine

“If you are one of those people whose mind is beginning to wander long before the bread sauce has gone cold, there should be only one book on your Christmas wish list this year… Atlas of Improbable Places by Travis Elborough and Alan Horsfield has that rare, through-the-wardrobe quality. It is a delightful compendium of the strangest places on the planet…”  —Daily Telegraph

“non-formulaic, deeply researched – and really worth your time.  Co-author and cartographer Alan Horsfield brings a scientific rigour to its scope and design.”
—The Book Club, GQ magazine

“This is a deliciously gloomy, sometimes spooky and often kooky collection of essays…”
—The Age, Australia

“The author makes a witty and well-informed guide to some of the world’s most curious and bizarre locations.”
—World of Cruising magazine

“With its identical towns, global corporations and digital landscapes, the modern world can seem quite uninspiring. But, for the British author Travis Elborough, interesting places do exist, you just need a way to find them.”
—Jocks & Nerds

“informative and enthusiastic, scholarly and amusing….once started it’s nigh on impossible to put down.”

“an elegant, atmospheric remedy for creeping world-weariness.”
—The Lady

“Elborough’s worldwide search for the curious, the surprising, the forgotten gems or the just plain eccentric is complemented splendidly by Horsfield’s impeccable maps of those places that are so far off the beaten track that their very existence is virtually unknown - or even officially restricted. ...a worthy addition to any bookshelf, coffee table or E-reader…”
—Aga Living

“Atlas of Improbable Places: A Journey to the World’s Most Unusual Corners by Travis Elborough, with maps by Alan Horsfield, is a curated guide to places that just don’t quite make sense. Elborough organized the book by theme– “Dream Creations,” “Floating Worlds,” “Otherworldly Spaces,” and more– rather than geography, which makes it easy to decide what genre of oddity or improbability you want to consider based on your mood. The large black and white photographs, coupled with beautifully simple maps, gives this book an air of sophistication and inspires more than a little awe.”
—Book Riot

“this engrossing book traverses the heights and depths, the beauty and terror, of our world.”—The Observer

“Guaranteed to whet the appetite of all budding urban explorers and teenagers wondering where to go on their gap year.”

“The photos are a treasure trove. The paper is divine. Travis Elborough’s writing is sublime, and the cartographic skills of Alan Horsfield make this a gift you will not want to part with. So buy yourself something nice this Christmas.

This feature require that you enable JavaScript in your browser.
END_OF_DOCUMENT_TOKEN_TO_BE_REPLACED

END_OF_DOCUMENT_TOKEN_TO_BE_REPLACED

This feature require that you enable JavaScript in your browser.
END_OF_DOCUMENT_TOKEN_TO_BE_REPLACED