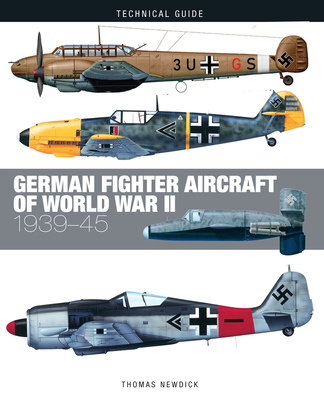 From biplanes and single-seat monoplanes to jet and rocket fighters, this richly detailed guide details the most important fighters used by the Luftwaffe during World War II. The Luftwaffe, or German Air Force, played a crucial role in that country's victories during World War II--and this reference explores all the major fighters used in the invasion of Poland, the defeat of France, the Battle of Britain, Operation Barbarossa, the war in the Mediterranean, the Eastern Front, and the Defense of the Reich. It features such classics as the Messerschmitt Bf 109 and Bf 110, the Heinkel He 100D-1, and the Focke-Wulf Fw 187 and Fw 190, as well as curiosities such as the Arado Ar 68F-1, Henschel Hs 123, and Heinkel He 51B biplanes. Late war innovations, such as the jet- and rocket-powered Me 262, Me 163, and Heinkel He 162, also appear. Most types include numerous variants and examples drawn from different theaters of the war. Each featured profile shows authentic markings and color schemes, and every separate model comes with detailed specifications.

An aviation and defense writer and editor, Thomas Newdick is based in Germany. He has researched and written numerous articles for various specialist magazines and journals examining aviation, both military and civilian; twentieth-century military history; and defense technology. He is a regular contributor to Combat Aircraft and Aircraft Illustrated magazines. He is on the editorial staff of both Guideline Publications and Aeroplane.

This feature require that you enable JavaScript in your browser.
END_OF_DOCUMENT_TOKEN_TO_BE_REPLACED

END_OF_DOCUMENT_TOKEN_TO_BE_REPLACED

This feature require that you enable JavaScript in your browser.
END_OF_DOCUMENT_TOKEN_TO_BE_REPLACED