Up Against the Wall: The Case for Opening the Mexican-American Border (Hardcover) 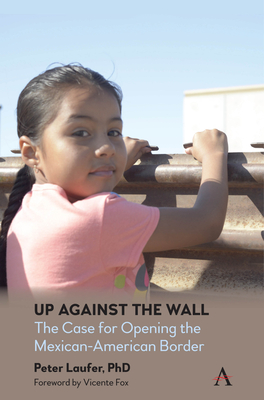 The book offers a step-by-step blueprint of radical proposals for the U.S.-Mexican border that go far beyond traditional initiatives to ease restrictions on immigration. The book argues that the border with Mexico should be completely open for Mexicans wishing to travel north. Up Against the Wall provides the background to understanding how the border has become a fraud, resulting in nothing more than the criminalization of Mexican and other migrants, the bloating of the mismanaged U.S. Immigration and Customs Enforcement, the deterioration of living standards along the frontier, and the enrichment of American employers. Placing the border in a historical perspective, Laufer shows how circumstances have deteriorated to the present Trump-exacerbated crisis, and why the region and the migration through it cannot be ignored. Over the last several years he has interviewed dozens of authorities and men and women in the street while reporting from Mexico, along the border, and in the United States. He demonstrates that the security of America's southern border is a fallacy; offers vivid examples to illustrate how the chain of misery and lawbreaking for migrants heading north is initiated by U.S. employers, traces many of the border problems to the Guatemalan-Mexican border, and explores the abuses of the Border Patrol and the growing presence of vigilantes on the American side. Up Against the Wall is sure to provoke a lively debate over the future of Mexican immigration and global migration crises.

Peter Laufer, PhD holds the inaugural James Wallace Chair in Journalism at the University of Oregon School of Journalism and Communication where he was awarded the Marshall Prize for teaching innovation. A former and longtime global correspondent for NBC News, Laufer reports on borders, identities and migration. He has covered the requisite wars and earthquakes, coups and elections.