Ghosts of Blood and Bone (Paperback) 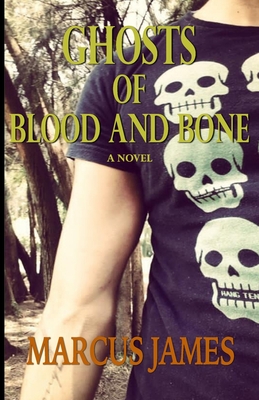 Bailey Nguyen has been dead for nine years, and yet, he still lingers. Chase Sheppard was Bailey's best friend, but something had always lurked beneath Bailey's surface; something dark and sadistic that had made him more than the average middle school bully, and had caused Chase to fear his friend and all that he was capable of.
Between Chase and Bailey was Aaron Christopher--insecure, unpopular, friendless, and effeminate. An obvious target for any teens ire, but for a fourteen-year-old Chase Sheppard, everything about Aaron had captivated and drawn him in, and in Bailey it had created a poisonous fixation that would lead to a horrifc accident involving him, Aaron, and a bathroom that only Aaron would walk out of alive.
For nearly a decade Aaron has tried to move on from that horrific day, and everything that came before it. Now, a senior at Fairhaven University in Bellingham, Washington and a budding artist, Aaron has done his best to carve out a normal life for himself, making friends, and hanging with his roommates; getting by despite the ways he's learned to cope with the dead boy who, it seems, will never let him go.
As if orchestrated by some greater, diabolical force, Aaron and Chase are brought back together suddenly, and the feelings that had hovered over them back when they were kids have not lessened in their effects, nor has the pull between them relaxed its grip.
A taunting voice over the phone that sounds like Bailey, and a mysterious shape that begins to stalk Aaron wherever he goes, emerges from the shadows of a blood-soaked past that refuses to stay dead and buried.
Ghosts of Blood and Bone is a lyrical exploration of trauma and the loss of innocence wrapped up in a blood-stained bow of human horror. This thrilling, ominous tale will keep you on the edge of your seat and linger long after the book is closed.

This feature require that you enable JavaScript in your browser.
END_OF_DOCUMENT_TOKEN_TO_BE_REPLACED

END_OF_DOCUMENT_TOKEN_TO_BE_REPLACED

This feature require that you enable JavaScript in your browser.
END_OF_DOCUMENT_TOKEN_TO_BE_REPLACED