The Best of Nest: Celebrating the Extraordinary Interiors from Nest Magazine (Hardcover) 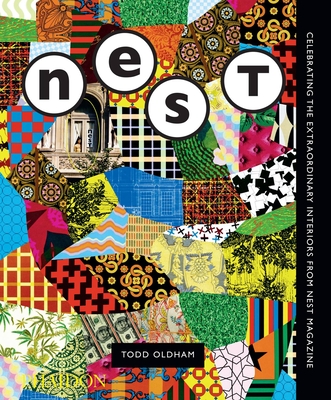 The first comprehensive collection of Nest, the magazine that revolutionized the way we look at interior space and decoration

Published from 1997 to 2004 by artist Joe Holtzman, Nest magazine eschewed the conventionally beautiful luxury interiors of other magazines and instead featured non-traditional, exceptional, and unusual environments. The Best of Nest, created by master bookmaker and former fashion designer Todd Oldham, includes selections from all 26 issues in a series of portfolios featuring the work of iconic writers and photographers such as Michael Cunningham, Patti Smith, Nan Goldin, and Derry Moore.

The book includes an introduction by Oldham, as well as an extensive essay by Holtzman, filled with new observations and a behind-the-scenes look at each issue's creation. Arranged chronologically, The Best of Nest presents each issue in a 16-page portfolio. An edit of the best stories, the best photographs, and the best design treatments have been selected and amplified in this lavish volume.

Replicating many of the clever and singular design elements that endeared Nest to its passionate fans around the world, The Best of Nest including gatefolds, foldouts, diecuts, and covers with silver foil and glitter.

Former fashion designer Todd Oldham has produced over 21 books, including bestselling monographs on Alexander Girard and Charley Harper. Oldham's craft and book series, Kid Made Modern and Hand Made Modern, sold millions of copies at Target as well as the Brooklyn, Getty, and Guggenheim museums, and the Museum of Modern Art, among other gift shops. As a photographer, Oldham was a frequent contributor to Nest.

"Sixteen years later, Holtzman and Oldam are publishing a book, The Best of Nest, about the magazine, which today feels both like a time capsule and entirely fresh." —New York Magazine

"A fabulous object in its own right." —MagCulture

This feature require that you enable JavaScript in your browser.
END_OF_DOCUMENT_TOKEN_TO_BE_REPLACED

END_OF_DOCUMENT_TOKEN_TO_BE_REPLACED

This feature require that you enable JavaScript in your browser.
END_OF_DOCUMENT_TOKEN_TO_BE_REPLACED