Amazing Temples of the World (Hardcover) 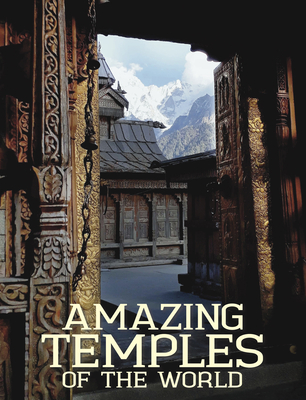 Organized by continent, Amazing Temples of the World offers the reader an intimate portrait of some spectacular and unusual places of worship dating from the fourth millennium BCE to the present.
Ornate or spartan, immense or intimate, from the Middle East to California, this book features such impressive places of worship as the Mahabhodi Temple, India, built in the location where Buddha is thought to have achieved enlightenment; the fifth-century BCE Temple of Confucius in Qufu, China, the largest Confucian temple in the world; Abu Simbel, in southern Egypt, the great carved monument to the Pharaoh Ramses II; the Golden Temple in Amritsar, Punjab, the spiritual home of the world's 25 million Sikhs; and the Shri Swaminarayan Temple in Neasden, London, the biggest Hindu temple outside India. Illustrated with 180 photographs, Amazing Temples of the World includes more than 150 places of worship, from Ancient Greece and Rome, through traditional synagogues to modern Buddhist, Taoist, and Sikh temples.

Michael Kerrigan was educated at St. Edward's College and University College, Oxford, England. He is the author of The History of Death, The Roman Emperors: A Dark History, Ancients In Their Own Words, World War II Plans That Never Happened, and American Presidents: A Dark History. He is a columnist, book reviewer, and feature writer for publications including the Scotsman and the Times Literary Supplement. Michael Kerrigan lives with his family in Edinburgh.

This feature require that you enable JavaScript in your browser.
END_OF_DOCUMENT_TOKEN_TO_BE_REPLACED

END_OF_DOCUMENT_TOKEN_TO_BE_REPLACED

This feature require that you enable JavaScript in your browser.
END_OF_DOCUMENT_TOKEN_TO_BE_REPLACED