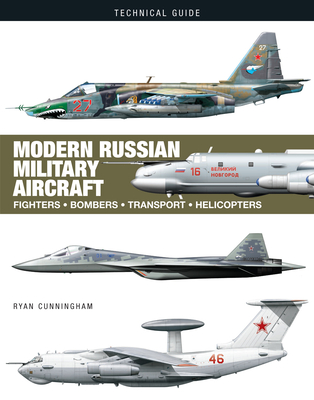 Illustrated throughout with detailed artworks with authentic markings and exhaustive specifications, this compact guide covers all the military aircraft deployed by the Russian Air Force from the end of the Cold War to the present. The Russian Air Force is the world's second-largest military air arm, capable of deploying more than 4,000 military aircraft. Organized by type, this book includes every significant aircraft used by the Russian military over the last 30 years, from the latest Sukhoi Su-57 stealth fighter and Kamov Ka-50 "Black Shark" attack helicopter to the evergreen Sukhoi Su-25 close air-support aircraft and the venerable Ilyushin Il-76 airlifter transport. The guide is illustrated with profile artworks, three-views, and dynamic view artworks of the more famous aircraft still in service, such as the Sukhoi Su-27 "Flanker," Mikoyan MiG-29 multirole fighter, and Tupolev Tu-160 heavy bomber. Modern Russian Military Aircraft is an essential reference for modelers and aviation enthusiasts with a passion for modern military aircraft.

Ryan Cunningham is an aviation and defense writer and editor who has worked on numerous aviation books and magazines over the last 20 years.

This feature require that you enable JavaScript in your browser.
END_OF_DOCUMENT_TOKEN_TO_BE_REPLACED

END_OF_DOCUMENT_TOKEN_TO_BE_REPLACED

This feature require that you enable JavaScript in your browser.
END_OF_DOCUMENT_TOKEN_TO_BE_REPLACED