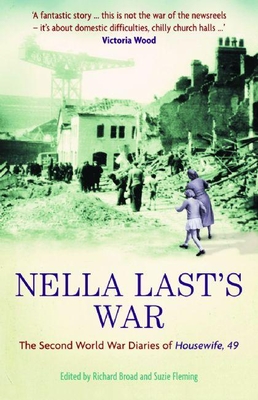 In September 1939, housewife and mother Nella Last began a diary whose entries, in their regularity, length and quality, have created a record of the Second World War which is powerful, fascinating and unique. When war broke out, Nella's younger son joined the army while the rest of the family tried to adapt to civilian life. Writing each day for the Mass Observation project, Nella, a middle-aged housewife from the bombed town of Barrow, shows what people really felt during this time. This was the period in which she turned 50, saw her children leave home, and reviewed her life and her marriage - which she eventually compares to slavery. Her growing confidence as a result of her war work makes this a moving (though often comic) testimony, which, covering sex, death and fear of invasion, provides a new, unglamorised, female perspective on the war years.'Next to being a mother, I'd have loved to write books.' Oct 8, 1939.

Nella Last kept a diary throughout WWII, under the auspices of the Mass Observation Archive. Her record of events offers a unique insight into one woman's war - on the Home Front. She died in 1968. Richard Broad is a filmmaker; he lives in Ireland. Suzie Fleming is a feminist writer and speaker; she lives in Cornwall.

"I adored [it]. An extraordinary glimpse into the heart of an 'ordinary' woman, Nella Last's day-to-day account of her war is spirited, poignant and utterly compelling."Lucy Moore

"A fantastic storyThis is not the war of the newsreelsit's about tiny domestic difficulties, lumpy custard"Victoria Wood

"I relished ither personality is so powerfulThere are so many things to admire about her."Margaret ForsterSunday Times UK

This feature require that you enable JavaScript in your browser.
END_OF_DOCUMENT_TOKEN_TO_BE_REPLACED

END_OF_DOCUMENT_TOKEN_TO_BE_REPLACED

This feature require that you enable JavaScript in your browser.
END_OF_DOCUMENT_TOKEN_TO_BE_REPLACED