Copper, Brass and Bronze of Iran: From the Late 14th to the Mid-18th Century in the Hermitage Collection (Hardcover) 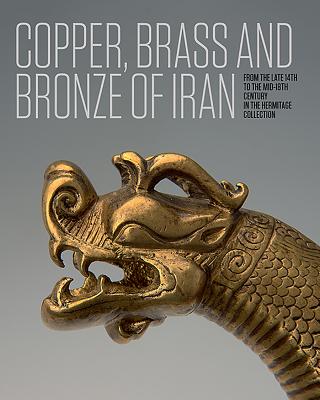 In Western Europe the Golden Age of Islamic metalwork in Iran was (and is) generally considered to be the earlier period, and later metalwork was collected almost by accident and has been correspondingly little studied and poorly published, though in recent decades the imbalance has been somewhat modified. The Hermitage Collection, which numbers 162 pieces is the largest collection in the world of later Iranian Islamic metalwork, from the West of Iran as far as the Punjab. The great majority of these are household utensils, and their manufacture is characteristic of the middling levels of urban societies, though in Khurasan in the late-15th and early 16th centuries brasses or bronzes inlaid with gold and silver were made for its Timurid rulers. The substantial numbers of Iranian copper-alloy astronomical instruments of this period were made by different craftsmen, for a different public, and deserve separate treatment, though not magic bowls, used in folk-medicine and divination, which are noticed in this volume.

In his introduction, Anatolii Ivanov gives a valuable directory of museums and other institutions of the former Soviet Union with significant collections, which complement the holdings of the Hermitage and together amount to a truly substantial corpus. The latter were acquired from private collections, but the core of the collection, from the museum attached to the school of industrial drawing founded by Baron Stieglitz, came to the Hermitage in the 1920s, when this was broken up. As well as minutely detailed descriptions of each piece and analyses of their decoration, Ivanov presents a detailed critical survey of the limited documentary evidence afforded by the inscriptions many pieces bear, which is of permanent value as a basis for further scholars working on later Islamic metalwork in general.

This feature require that you enable JavaScript in your browser.
END_OF_DOCUMENT_TOKEN_TO_BE_REPLACED

END_OF_DOCUMENT_TOKEN_TO_BE_REPLACED

This feature require that you enable JavaScript in your browser.
END_OF_DOCUMENT_TOKEN_TO_BE_REPLACED