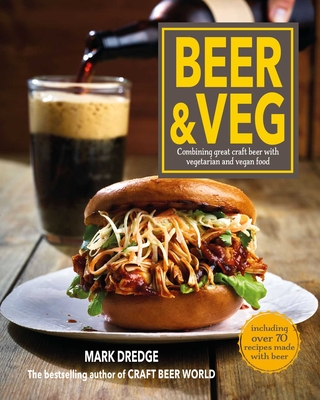 Beer and Veg brings together craft beer and vegetarian and vegan food, with the best suggestions for how to perfectly pair your beer to whatever dish you’re eating, and over 70 recipes which use beer as an ingredient.

The introduction covers how to approach beer with vegetarian/vegan food; then there are tips and tricks on matching beer and food; how to cook with beer in veg/vegan dishes; an extended section of different beer styles and foods to enjoy with them; and then a selection of over 70 great recipes using beer as an ingredient. The suggestions made in the book will cover beers from around the world, plus many common and popular dishes. The recipes are a mix of vegetarian and vegan, with vegan options available for nearly every dish. For some of the most popular dishes, like mac and cheese, there are two recipes, one for the ultimate veggie version and the other for the ultimate vegan version. Having switched to a vegetarian diet himself in the last two years, author and award-winning beer writer Mark Dredge is the perfect person to help you combine a love of craft beer with plant-based food.

Mark Dredge is an award-winning beer, food, and travel writer from London, England. In 2011, 2013, and 2014, he was awarded Beer and Food Writer of the Year from the British Guild of Beer Writers for the work on his blog Pencil and Spoon and then his first two books, Craft Beer World and Beer and Food, which also won an award from the North American Guild of Beer Writers. Mark has also written The Best Beer in the World, Cooking with Beer, and The Beer Bucket List for Dog 'n' Bone, and his writing has featured in leading publications across the globe; he’s also an international beer judge. You can follow him on Twitter and Instagram: @MarkDredge.

This feature require that you enable JavaScript in your browser.
END_OF_DOCUMENT_TOKEN_TO_BE_REPLACED

END_OF_DOCUMENT_TOKEN_TO_BE_REPLACED

This feature require that you enable JavaScript in your browser.
END_OF_DOCUMENT_TOKEN_TO_BE_REPLACED