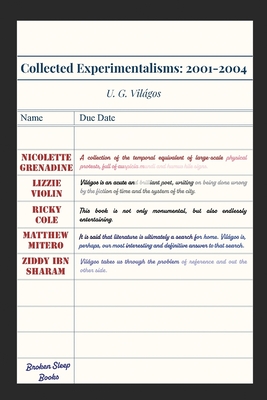 Vil gos has created a nightmare of language in which the shock of seeing sentences come apart, or the manipulation of sound to make an utterance seem oblique and dissonant, are present to the last. The section at the start of the collection, where the reader is met with an array of grammatical oddities and erroneous descriptions, is remarkable for its combination of chaos and order. The author makes a case for using the letter z so that there would be no need for any words containing the letter c; and the line about the C on the first verse is set to a song by the Scottish Folk rock band Penumbra Number One, an obscure band at the time.

Here, Vil gos has mastered the hard edge and profundity of language and set about making language seem silly and repetitive by folding it together into a tone which elevates it into poetry; in lines which combine and recombine, eventually working their way to absurdity. The reader is led to believe that the author has forgotten his place within the poem, or its language, and is forced into the absurd position of watching the language distort itself into incoherence. It suggests that language does not merely misdirect but hijack us, and that it has no respect for the speaker.

This feature require that you enable JavaScript in your browser.
END_OF_DOCUMENT_TOKEN_TO_BE_REPLACED

END_OF_DOCUMENT_TOKEN_TO_BE_REPLACED

This feature require that you enable JavaScript in your browser.
END_OF_DOCUMENT_TOKEN_TO_BE_REPLACED