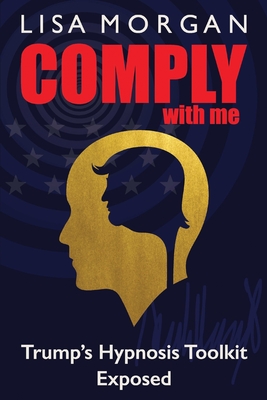 You don't think you've ever been hypnotised by a politician? Or anyone else out to persuade you? This might change your mind.

Comply with Me solves the puzzle of how Donald Trump gains and keeps loyal support, a conundrum that has stumped professional commentators as well as all those who don't feel compelled to vote for him. It reveals the motive behind his weird handshakes, why he speaks in such a strange way and even what drives him to keep the area around his eyes so pale. Whether he was trained or is a natural, Trump uses hypnosis techniques to get his message deep into people's minds - and he is not the only professional persuader using such tricks either.

Trump's aim is to achieve unthinking compliance and he does that by using hypnotic confusion techniques which enable him to embed suggestions into his subjects' unconscious minds. He achieves this with individuals as well as with the crowds he addresses. A central part of hypnosis practice is artful suggestion. Donald Trump is a master of the craft. He can imply what he wants to happen without needing to make his commands clear.

As a child, like all of us, he absorbed suggestions from his grandfather and parents. The impact of repeatedly being told when young that he was a 'king' and a 'killer' is evident in his adult behaviour. Positive Thinking is a keystone of Trump's self-regard, learning it from the leading exponent, Norman Vincent Peale. who told him he would be 'America's greatest builder'. He also learnt hypnosis, probably when it was fashionable as NLP and he was keen to clinch real estate deals.

Hypnotherapists will lie or exaggerate to achieve the aims of their clients. This is ethical if the aim is to help a person give up an addiction or achieve a sense of well-being. Trump and other politicians also recognise that the truth is less important than emotions if they want to convince someone. Their objectives however are not therapeutic.

People are often afraid of hypnosis, but they cannot be left ignorant any longer. It's a natural part of being human; we all go into a trance regularly, when watching TV or doing repetitive tasks. Used well, hypnosis is a force for good. It is also a powerful tool to gain control over others. Some politicians, including those on the far-right, are using hypnosis to sway public opinion. If an argument is going against them, they will use misdirection and exaggeration to divert attention from opposing views. Trump and others who imitate him are experts at using hypnotic confusion to cloud the truth.

We must acknowledge the power of hypnosis and make everyone aware of how it works. Readers will learn to spot when someone is trying to manipulate them subliminally and how to defend themselves from it. The book describes how to use hypnotic trance to help yourself, to relax, become acquainted with your unconscious wisdom and make sure your opinions are your own.

Lisa Morgan identified what Trump was doing early in his presidency and felt compelled to expose it.

This feature require that you enable JavaScript in your browser.
END_OF_DOCUMENT_TOKEN_TO_BE_REPLACED

END_OF_DOCUMENT_TOKEN_TO_BE_REPLACED

This feature require that you enable JavaScript in your browser.
END_OF_DOCUMENT_TOKEN_TO_BE_REPLACED