An Unreasonable Woman: A True Story of Shrimpers, Politicos, Polluters, and the Fight for Seadrift, Texas (Paperback) 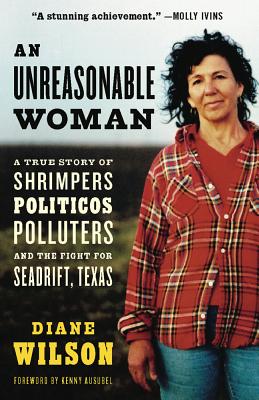 When Diane Wilson, fourth-generation shrimp-boat captain and mother of five, learns that she lives in the most polluted county in the United States, she decides to fight back. She launches a campaign against a multibillion-dollar corporation that has been covering up spills, silencing workers, flouting the EPA, and dumping lethal ethylene dichloride and vinyl chloride into the bays along her beloved Texas Gulf Coast. In an epic tale of bravery, Wilson takes her fight to the courts, to the gates of the chemical plant, and to the halls of power in Austin. Along the way she meets with scorn, bribery, character assassination, and death threats. Finally Wilson realizes that she must break the law to win justice: She resorts to nonviolent disobedience, direct action, and hunger strikes. Wilson's vivid South Texas dialogue resides somewhere between Alice Walker and William Faulkner, and her dazzling prose brings to mind the magic realism of Gabriel Garcia Marquez, replete with dreams and prophecies.

Diane Wilson is an eco-warrior in action. A fourth-generation shrimper, Wilson began fishing the bays off the Gulf Coast of Texas at the age of eight. By 24, she was a boat captain. In 1989, while running her brother's fish house at the docks and mending nets, she read a newspaper article that listed her home of Calhoun County as the number one toxic polluter in the country. She set up a meeting in the town hall to discuss what the chemical plants were doing to the bays and thus began her life as an environmental activist. Threatened by thugs and despised by her neighbors, Wilson insisted the truth be told and that Formosa Plastics stop dumping toxins into the bay. Since then, she has launched legislative campaigns, demonstrations, and countless hunger strikes to raise awareness for environmental and human rights abuses. Wilson speaks to the core of courage in each of us that seeks to honor our own moral compass, and act on our convictions. She has been honored with a number of awards for her work, including: National Fisherman Magazine Award, Mother Jones's Hell Raiser of the Month, Louis Gibbs' Environmental Lifetime Award, Louisiana Environmental Action (LEAN) Environmental Award, Giraffe Project, Jenifer Altman Award, Blue Planet Award and the Bioneers Award. She is also a co-founder of CODEPINK, the Texas Jail Project, Texas Injured Workers, Injured Workers National Network and continues to lead the fight for social justice.

This feature require that you enable JavaScript in your browser.
END_OF_DOCUMENT_TOKEN_TO_BE_REPLACED

END_OF_DOCUMENT_TOKEN_TO_BE_REPLACED

This feature require that you enable JavaScript in your browser.
END_OF_DOCUMENT_TOKEN_TO_BE_REPLACED