Universal Grammar of Story(TM): An Author's Guide to Writing for the Soul of the World (Paperback) 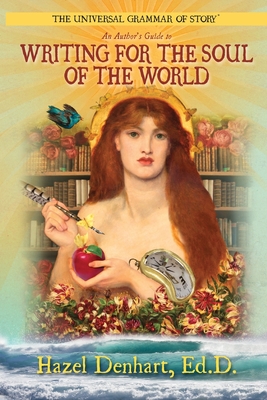 Universal Grammar of StoryTM is a mythopoetic writing theory covering the technical necessities of storytelling as well as the philosophical and psycho-social needs of writers-and their audiences. That stories have consequences drives this revival of an ancient writer-archetype: the cultural scout leading society along the uncharted edges of an increasingly dangerous social frontier.

First, "The Call to Write" introduces the idea of personal, social, and mythological drives calling creative artists (and their audiences) to the work. The personal call draws us to tackle unfinished business in our own psychology through the daydream of stories. The social call joins us to address generational struggles held in the collective unconscious. And the mythological call brings us to mystical encounter through moments of "shared reverence" in stories. Writers must draw from their logical, emotional, and intuitive forms of intelligence to respond to the call. But because only logical intelligence is trained in formal education, this section explores how to distinguish and advance the other forms with a brief look into the history of creative art.

Part two looks into the power of language and how subtle changes in everyday speech and gesture can enhance emotional and intuitive agility. Included is the remarkable idea that most people speak four distinct varieties of their native language and that the simple act of switching between them can easily trigger writer's block. Also offered is a brief review of the evolution of English from Anglo-Saxon to its many modern varieties, and the surprising benefits of listening to unrecognizable forms.

Part three builds on the concrete, technical aspects of storytelling from the no-nonsense logic of Aristotle to the likeminded mid-twentieth century pragmatism of Bernard Grebanier, Lajos Egri, and Syd Field. Practical discussions of character building, plot development, and timing lead to new terrain with the introduction of the "Hero-Villain Theory of Convergence." This controversial theory views the villain/antihero as the only one capable of removing the hero's fa ade to reveal the authentic soul beneath. As the hero's masque slips, comes a momentary flash where hero and villain appear as philosophically the same. This section also introduces a new idea of timing where well-known milestones occur at universal proportions regardless of story types, genres, or lengths.

Part four turns to mythology with a critical summary of the hero's journey according to Joseph Campbell. Here simple correctives are offered to ameliorate Campbell's stereotyping which has grown uncomfortably out of step with contemporary sensibilities. Finally, Aldous Huxley's Perennial Philosophy brings the book back to its beginning with "practical" ideas for attracting mystical philosophy to a story.

Intriguing images in charcoal, ink, and pencil by artist Rick Denhart combine with anecdotes from the author's unusual life adding to the grand theory's lively and entertaining feel. Universal Grammar of Story is a philosophical and technical wonder, accessible to the novice through clear and abundant examples while remaining challenging to advanced students and professionals with thought provoking scholarship. Peer reviewed and suitable for college text adoption.

This feature require that you enable JavaScript in your browser.
END_OF_DOCUMENT_TOKEN_TO_BE_REPLACED

END_OF_DOCUMENT_TOKEN_TO_BE_REPLACED

This feature require that you enable JavaScript in your browser.
END_OF_DOCUMENT_TOKEN_TO_BE_REPLACED