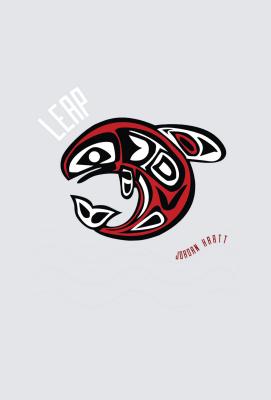 By Jordan Hartt
Email or call for price
Special Order

Poetry. "From the pages of LEAP, Jordan Hartt's poems and stories work their way into a reader's subconscious much as water from saturated soil does when seeping through concrete walls to a floor in a basement. His images (vivid and clean) shine like the moons and the salmon and the glittering coins that salt his work. One of his speakers believes: The only thing she's captured perfectly...is the smoke. Jordan Hartt has captured this (and more) within these shining pages."--Tom Aslin "'I once seen a man turned into a bear' the story begins, in a time when 'the whole earth was rusting in the rain.' The inhabitants of this landscape survive by transformation, or they do not survive. In one poem, a woman leans too far from the bridge rail, and becomes a salmon--or does she? A man desperate to keep his wife from leaving is an owl tracking a mouse through snow. These are myths and legends created and destroyed, told by elders, by soldiers, by loggers, and lovers that show us the 'beauty and terror of being a human.'"--Jenifer Lawrence "Like Ovid's Metamorphoses, Jordan Hartt's LEAP is concerned with history, change, and origins. These poems are descriptive ('truck sliding off gravel road'), full of Northwest imagery ('firs sculpted by the raw coastal wind'), and often rooted in colloquial voices. But Hartt extends his contemporary vision most obviously through his use of form. Without punctuation and using white space, Hartt brings his characters' lives into the immediacy of thought."--Jeremy Voigt.