Knights of the Broadax: The Story of the Wyoming Tie Hacks (Paperback) 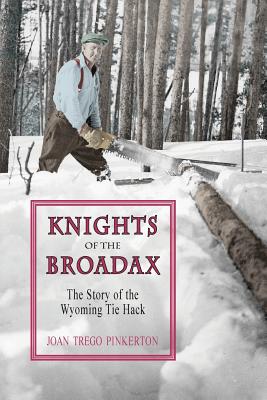 At one time, Wyoming provided most of the ties for the nation's railroads. Knights of the Broadax, the Story of the Wyoming Tie Hack, recalls the period beginning in 1914 when strong men, mostly Scandinavians, were carving railroad crossties out of the upper Wind River mountains. Their only tools were their own brute strength, a crosscut saw, a broadax and a double-bitted ax. A good Hack could cut as many as 50 ties a day, with most destined for the Chicago and North Western Railroad.

Set against the breathtaking beauty of northwestern Wyoming, this story in words and more than 180 photos, takes the reader back to a way of life lived in near isolation, with only the company town owned the Wyoming Tie & Timber Company.

By the early 1930s mechanization began to influence the business as 3-man mobile sawmills became available, though the cut trees were still skidded out by teams of horses. Then the advent of World War II created a new dilemma: an increased demand for ties and fewer men to cut them, as many were called in service to their country. As a solution, the company secured a contingent of German prisoners of war and put them to work on the 1945 drive.

Over ten million hand cut ties were snaked out of those woods over the years by the Company--brought out by flume and stream to be floated 100 miles down the Wind River to Riverton each summer in a magnificent drive before further mechanization finally signaled the end of the era in 1946.

The Tie Hacks who created the legend are long gone, but their memory has been perpetuated in a 14-foot-limestone monument that stands on a lonely knoll overlooking the site of the first Tie Camp. This is their story.

This feature require that you enable JavaScript in your browser.
END_OF_DOCUMENT_TOKEN_TO_BE_REPLACED

END_OF_DOCUMENT_TOKEN_TO_BE_REPLACED

This feature require that you enable JavaScript in your browser.
END_OF_DOCUMENT_TOKEN_TO_BE_REPLACED