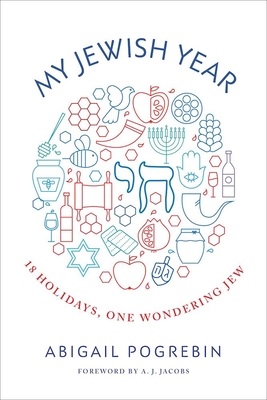 The much-dissected Pew Research Center study of 2013, "A Portrait of Jewish Americans," revealed that most U.S. Jews locate their Jewishness in their ancestry and culture--not in religion. Abigail Pogrebin wondered if perhaps that's because we haven't all looked at religion closely enough. Although she grew up following some holiday rituals, Pogrebin realized how little she knew about their foundational purpose and current relevance. She wanted to understand what had kept these holidays alive and vibrant, in some cases for thousands of years. Her curiosity led her to embark on an entire year of intensive research, observation, and writing about the milestones on the Jewish calendar. My Jewish Year travels through this calendar's signposts with candor, humor, and a trove of information, capturing the arc of Jewish observance through the eyes of a relatable, wandering--and wondering--Jew. The chapters are interspersed with brief reflections from prominent rabbis and Jewish thinkers. Maybe you're seeking an accessible, digestible roadmap for Jewish life. Maybe you'd appreciate a fresh exploration of what you've mastered. Whatever your motivation, you'll be educated, entertained, and inspired by Pogrebin's unusual journey--and by My Jewish Year.

Abigail Pogrebin's immersive exploration of the Jewish calendar began with her popular 12-month series for the Forward. Now, in My Jewish Year: 18 Holidays, One Wondering Jew, Pogrebin has expanded her investigation--infusing it with more of her personal story and exposing each ritual's deeper layers of meaning. Pogrebin is also the author of Stars of David: Prominent Jews Talk About Being Jewish, in which she discussed Jewish identity with 62 celebrated public figures ranging from Justice Ruth Bader Ginsburg to Steven Spielberg, from Mike Wallace to Natalie Portman. Pogrebin's second book, One and the Same, about the challenges of twinship, is grounded in her own experience as half of an identical pair. Most recently, she published "Showstopper," a bestselling Amazon Kindle Single that recalls her adventures as a 16-year-old cast member in the original Broadway production of Stephen Sondheim's flop-turned-cult-favorite, "Merrily We Roll Along." Pogrebin's articles have appeared in Newsweek, New York magazine, The Daily Beast, Tablet, and many other publications. Pogrebin was formerly a producer for Ed Bradley and Mike Wallace at CBS News' 60 Minutes, where she was nominated for an Emmy. Before that, she produced for broadcasting pioneers Fred Friendly, Bill Moyers, and Charlie Rose at PBS. A frequent speaker at synagogues and Jewish organizations around the country, Pogrebin has for seven years produced and moderated her own interview series at the JCC of Manhattan called "What Everyone's Talking About." Abigail Pogrebin lives in New York with her husband, David Shapiro, and their two teenage children. A.J. Jacobs is the editor of What It Feels Like and the author of The Two Kings: Jesus and Elvis and America Off-Line. He is the senior editor of Esquire and has written for The New York Times, Entertainment Weekly, Glamour, New York magazine, New York Observer, and other publications. He lives in New York.

This feature require that you enable JavaScript in your browser.
END_OF_DOCUMENT_TOKEN_TO_BE_REPLACED

END_OF_DOCUMENT_TOKEN_TO_BE_REPLACED

This feature require that you enable JavaScript in your browser.
END_OF_DOCUMENT_TOKEN_TO_BE_REPLACED