The Dream King: How the Dream of Martin Luther King, Jr. Is Being Fulfilled to Heal Racism in America (Paperback) 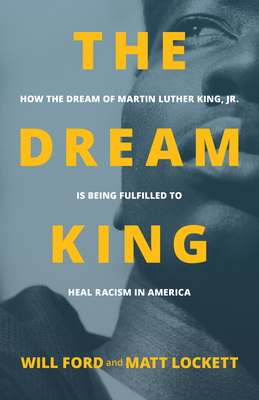 There is hope to heal the racial divide. Is the dream of equality Dr. King envisioned still alive today? Can our historic national hurts still be healed? How can we rise above the racial tension threatening the nation? The Dream King is the astonishing true story of two men whose lives are woven together by history and the hidden hand of God. It reveals an inspiring narrative that exposes systemic injustice and delivers new keys for understanding the nation’s past, present, and future. • Learn about the nation’s hidden history and the unknown heroes who overcame injustice. • Discover how your life is an important part of a much bigger story. • Be equipped to be a countercultural dreamer and change the world around you.

Will Ford is the Director of the Marketplace Leadership Major at Christ For The Nations Institute and is the co-founder of 818 The Sign. Many know him internationally, however, for his family heirloom passed down through history and its connection to slavery and prayer for freedom. As a leader in the prayer movement, Will uses this “prayer bowl” as a catalyst for mobilizing prayer and teaching about intercession, revival, and societal transformation. He believes the prayers of a godly remnant of all races—revivalists and abolitionists—brought revival to America and ultimately ended slavery. Receiving their mantle from yesterday, Will is actively training a new generation to release justice to the most marginalized today. Will is a father of four. He and his wife Dehavilland reside in Dallas, TX.

Matt Lockett is the Executive Director of the Justice House of Prayer DC, located on Capitol Hill in Washington. From the governmental gate of the nation, Matt leads prayer and intercession that appeals to a holy hill higher than Capitol Hill—to a heavenly court above the Supreme Court. Matt and his wife Kim have four children. They have served as full-time missionaries in the nation’s capital since just after the founding of JHOP DC in 2004. Matt’s passion is to help father a young, consecrated generation that will usher justice into the earth. Matt travels and speaks on the topics of prayer, fasting, governmental intercession, and racial reconciliation. Matt also oversees Bound4LIFE, a pro-life prayer movement universally recognized by iconic red tape worn over the mouth with the word “LIFE” handwritten on it. “It’s not a protest. It’s a prayer meeting.”

This feature require that you enable JavaScript in your browser.
END_OF_DOCUMENT_TOKEN_TO_BE_REPLACED

END_OF_DOCUMENT_TOKEN_TO_BE_REPLACED

This feature require that you enable JavaScript in your browser.
END_OF_DOCUMENT_TOKEN_TO_BE_REPLACED