Always My Hero: A Sister's Inspiring Story of Love, Sacrifice, and Hope (Paperback) 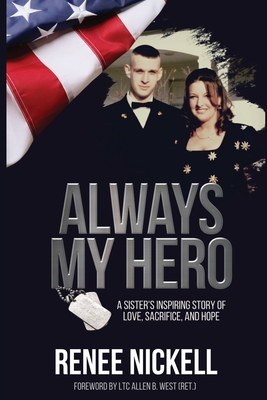 Always My Hero is the inspirational true story about a young woman whose Marine brother is tragically killed in action. She must fight her way through grief, come to terms with the estrangement of her father and face her past or risk losing everything.

Her world came crashing down when she got the call saying her brother had been killed.

Major Samuel Griffith, a Marine Corps Officer, was fiercely dedicated to becoming an F-18 aviator, he embodied perseverance and grit. Sam led his men with wisdom beyond his years. He was truly living the dream. Sam's 3rddeployment, he was serving a ground tour as a Forward Air Controller. One tragic day, he observed one of his Marines under heavy fire, switching places with him. This tragic decision cost Sam his life, but saved his entire team.

His surviving sister, Renee, quickly realized as a new Gold Star sister, that siblings are often the "forgotten mourners," and had to fight through PTSD with virtually no support or community. As a result, Renee was compelled to share her honest, raw, and at times gut-wrenching account of what it was like losing a sibling to war, while giving others an inside glimpse into the devastation a military family endures for the cost of freedom.

Always My Hero has been featured on FOX News, The 700 Club, The Hallmark Channel, SOFREP Radio and many other media outlets. Writer's Digest calls this book "honest and relatable, great beauty and depth."

Renee takes you on a nostalgic journey through their childhood and how Sam grew into an American hero. This extraordinary memoir will have you laughing one moment and moved to tears the next. Get to know Sam and the amazing Marine he was through the eyes of his sister and fellow servicemen and discover how to exchange sorrow for strength so you can crawl out of the trenches of despair and finally find...hope.

This feature require that you enable JavaScript in your browser.
END_OF_DOCUMENT_TOKEN_TO_BE_REPLACED

END_OF_DOCUMENT_TOKEN_TO_BE_REPLACED

This feature require that you enable JavaScript in your browser.
END_OF_DOCUMENT_TOKEN_TO_BE_REPLACED