The Story of Motown (Paperback) 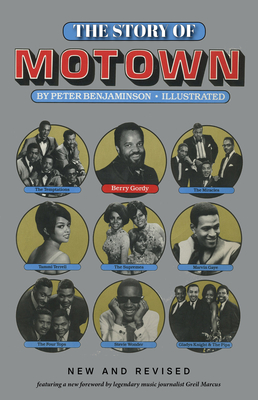 By Peter Benjaminson, Greil Marcus (Foreword by)
$17.95
Email or call for price.

Re-release of the first book ever published in America about the legendary Motown Record Company, with a new foreword by legendary music journalist Greil Marcus In January 1959 Berry Gordy borrowed $800 from his family and founded the Detroit-based record company that in less than a decade was to become the largest black-owned business in the United States. It also became one of the most productive and influential producers of popular music anywhere in the world, mainly by combining the best features of black and white American popular music. Even a short list of the recording and performing talent that Gordy recruited, trained and produced for his company is awesome: Diana Ross, The Supremes, Stevie Wonder, The Temptations, The Four Tops, Smokey Robinson, Marvin Gaye and Mary Wells. The Story of Motown is the story of Berry Gordy's triumph over powerful, established financial interests, entrenched popular taste, bigotry and racism. By inventing a sound that appealed to whites as well as blacks, and that was immediately identifiable to an entire generation of listeners, Gordy demonstrated his genius as a producer; by breaking the exploitive practice of cover records, he helped black artists control their own music and share in the proceeds of hits; and by the sheer force of his will, courage, and intelligence, he demonstrated that a black man from the urban ghetto could aspire to and conquer the heights of traditional American business, including the movie business. Unfortunately, while doing all of this, he also found new ways to exploit his talented artists and eventually lost many of them to companies that paid them more. The Story of Motown is the story of the rise and fall of one of the most important cultural touchstones in American history

Peter Benjaminson is the author of three other books about the Motown Record Company and its artists: The Lost Supreme: The Life of Dreamgirl Florence Ballard (Lawrence Hill Books, 2008); Mary Wells: The Tumultuous Life of Motown's First Superstar (Chicago Review Press, 2012); and Super Freak: The Life of Rick James (Chicago Review Press, 2017). A former reporter for the Detroit Free Press and the Atlanta Journal-Constitution, he is also the author of four books on non-Motown related subjects. He is now working with Bill Haley Jr. on a biography of Bill's father, rock 'n' roll pioneer Bill Haley Sr.

This feature require that you enable JavaScript in your browser.
END_OF_DOCUMENT_TOKEN_TO_BE_REPLACED

END_OF_DOCUMENT_TOKEN_TO_BE_REPLACED

This feature require that you enable JavaScript in your browser.
END_OF_DOCUMENT_TOKEN_TO_BE_REPLACED