The Internet of Money Volume Two: A collection of talks by Andreas M. Antonopoulos (Paperback) 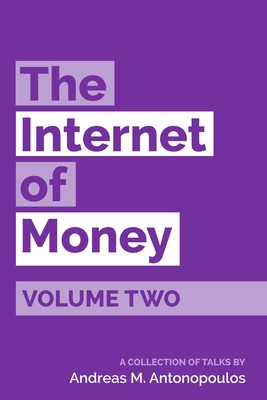 "The Internet of Money Volume Two: a collection of talks" is the spectacular sequel to the cult classic and best seller "The Internet of Money Volume One: a collection of talks" by Andreas M. Antonopoulos. Volume Two contains 11 more of his most inspiring and thought-provoking talks, including: Introduction to Bitcoin; Blockchain vs Bullshit; Fake News, Fake Money; Currency Wars; Bubble Boy and the Sewer Rat; Rocket Science and Ethereum's Killer App; and many more. Volume Two also includes an all-new frequently asked questions section In 2013, Andreas M. Antonopoulos started publicly speaking about bitcoin and quickly became one of the world's most sought-after speakers in the industry. To date, he has delivered more than 75, TED-style talks in venues ranging from the Henry Ford Museum in the United States to packed-out Bitcoin Meetups around the world including Brazil, the Czech Republic, and New Zealand, and every talk is completely different.In these performances, Antonopoulos walks onto the stage and delivers a live, unscripted talk. Without a deck in sight, he unleashes his latest insights into the lightning-fast changes surrounding bitcoin. Combining the knowledge of one of the world's leading blockchain technologists, with cultural context, comedy, and the flair of a performance artist, Antonopoulos conveys an up-to-the-second understanding of bitcoin to live audiences worldwide.Many of these talks were so visionary, their content so educational, that they were curated and refined into a book form. On 7 September 2016, The Internet of Money Volume One was launched on The Joe Rogan Experience podcast (the interview has since been viewed more than 300,000 times). With its genesis in the lived, human experience, The Internet of Moneyoffered something that was desperately needed: an explanation of the philosophy, economics, politics, poetics, and technologies of bitcoin and open blockchains set within a broad historical context and using clear, simple language that delighted general audiences and bitcoin enthusiasts alike. During its first year, Volume One quickly became a hit in the global crypto-currency community-appealing to audiences from fields as diverse as the arts, sciences, and humanities. As one reader wrote: "It provides a uniquely accessible take on a mind-bendingly abstract system." The Internet of Money Volume Two: a collection of talks builds on that momentum and offers readers an opportunity to experience more these inspiring and thought-provoking talks in print. It also includes a bonus question and answer section, where Andreas answers some of the most frequently asked questions from audience members during his worldwide tour. Volume Two is a sequel that rivals, even exceeds, the first, in content, scope, and vision. These talks are intellectual fire-starters you won't want to miss. Make this book part of your collection and see why Andreas M. Antonopoulos is considered the most powerful and engaging voice in crypto-currency and blockchain.

Andreas M. Antonopoulos is a critically-acclaimed author, speaker, educator, and one of the world's foremost bitcoin and open blockchain experts. He is known for delivering electric talks that combine economics, psychology, technology, and game theory with current events, personal anecdote, and historical precedent effortlessly transliterating the complex issues of blockchain technology out of the abstract and into the real world. In 2014, Antonopoulos authored the groundbreaking book, Mastering Bitcoin, widely considered to be the best technical guide ever written about the technology. His second book, The Internet of Money Volume One, unveiled the why of bitcoin and became a bestseller on Amazon. Forthcoming titles include The Internet of Money Volume Two: a collection of talks (2017) and Mastering Ethereum (2018). He is a teaching fellow with the University of Nicosia, serves on the Oversight Committee for the Bitcoin Reference Rate at the Chicago Mercantile Exchange, and has appeared as an expert witness in hearings around the world, including the Australian Senate Banking Committee and the Canadian Senate Commerce, Banking and Finance Committee.

This feature require that you enable JavaScript in your browser.
END_OF_DOCUMENT_TOKEN_TO_BE_REPLACED

END_OF_DOCUMENT_TOKEN_TO_BE_REPLACED

This feature require that you enable JavaScript in your browser.
END_OF_DOCUMENT_TOKEN_TO_BE_REPLACED