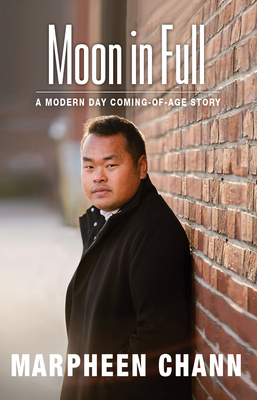 In his memoir, Moon in Full, Marpheen Chan recounts an emotional and modern day coming-of-age story that has roots in the Cambodian genocide and weaves through troubled familial relationships, housing projects, foster homes, churches, and college life, as well as rural Maine where he struggles to reconcile his fears and beliefs as a young gay man of color adopted into a white Evangelical family. He has continually struggled with his lost identity as a Cambodian and homophobia as a young gay man of color. As PTSD, poverty, abuse, and addiction took their toll on his mother, Chann and his siblings were removed and placed into foster care. And that is where his journey into adulthood truly begins.

With compassion and honesty, Chann recalls what he has learned, what he has found and what he has lost in his evolution from rebel boy to holy-roller youth to advocate for equality and civil rights, all in one of the nation's oldest and least diverse states; but a state that he proudly calls home. Chann's story shines a spotlight on the search for truth, compassion, and the struggles of our complicated era.

Marpheen Chann is a Maine politician, activist, writer, speaker, community organizer, and gay man of color. He helped found the Cambodian Community Association of Maine in 2018, and serves as its president. In 2014, Chann became the first of his biological or adoptive families to graduate college, studying political science, philosophy, and economics at the University of Southern Maine, where he helped start the University of Southern Maine's Queer Straight Alliance. He later earned a law degree from the University of Maine School of Law. Chann has devoted his career to civil rights and advancing diversity, inclusion, and equity in education, politics, and municipal government. His service to Portland and the Cambodian community is his way of giving back and connecting to his roots. Marpheen lives in Portland and he hopes to someday foster and adopt his own children. Until then, he's content being an uncle to upwards of ten nieces and nephews (including dogs and cats). Moon in Full is his first book.

This feature require that you enable JavaScript in your browser.
END_OF_DOCUMENT_TOKEN_TO_BE_REPLACED

END_OF_DOCUMENT_TOKEN_TO_BE_REPLACED

This feature require that you enable JavaScript in your browser.
END_OF_DOCUMENT_TOKEN_TO_BE_REPLACED