The Great White Way: Race and the Broadway Musical (Paperback) 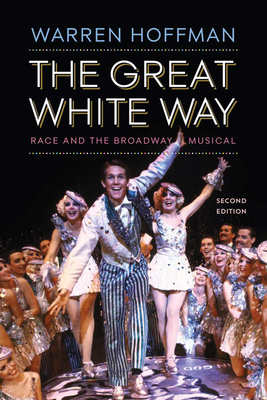 Broadway musicals are one of America’s most beloved art forms and play to millions of people each year. But what do these shows, which are often thought to be just frothy entertainment, really have to say about our country and who we are as a nation?

Now in a new second edition, The Great White Way is the first book to reveal the racial politics, content, and subtexts that have haunted musicals for almost one hundred years from Show Boat (1927) to Hamilton (2015). This revised edition includes a new introduction and conclusion, updated chapters, as well as a brand-new chapter that looks at the blockbuster musicals The Book of Mormon and Hamilton.

Musicals mirror their time periods and reflect the political and social issues of their day. Warren Hoffman investigates the thematic content of the Broadway musical and considers how musicals work on a structural level, allowing them to simultaneously present and hide their racial agendas in plain view of their audiences. While the musical is informed by the cultural contributions of African Americans and Jewish immigrants, Hoffman argues that ultimately the history of the American musical is the history of white identity in the United States.

Presented chronologically, The Great White Way shows how perceptions of race altered over time and how musicals dealt with those changes. Hoffman focuses first on shows leading up to and comprising the Golden Age of Broadway (1927–1960s), then turns his attention to the revivals and nostalgic vehicles that defined the final quarter of the twentieth century. He offers entirely new and surprising takes on shows from the American musical canon—Show Boat (1927), Oklahoma! (1943), Annie Get Your Gun (1946), The Music Man (1957), West Side Story (1957), A Chorus Line (1975), and 42nd Street (1980), among others. In addition to a new chapter on Hamilton and The Book of Mormon, this revised edition brings The Great White Way fully into the twenty-first century with an examination of jukebox musicals and the role of off-Broadway and regional theaters in the development of the American musical.

New archival research on the creators who produced and wrote these shows, including Leonard Bernstein, Jerome Robbins, Stephen Sondheim, and Edward Kleban, will have theater fans and scholars rethinking forever how they view this popular American entertainment.

WARREN HOFFMAN, PhD, is the author of The Passing Game: Queering Jewish American Culture. He has worked professionally in the theater for more than ten years as a program director, producer, theater critic, and playwright.

“From Show Boat to Hamilton, from Oklahoma! to The Book of Mormon, Warren Hoffman provides an engaging and insightful analysis of how race has shaped 20th and 21st-century musical theatre.  His perceptive and persuasive readings foreground normative whiteness and underline how every musical is “about” race.  Required reading for the musical theatre student and aficionado alike.”
— Stacy Wolf

“Warren Hoffman’s new edition of The Great White Way remains as provocative, smart, challenging and entertaining as the original publication. Hoffman’s book is, in some sense, like a Broadway musical itself — surprising in its many and varied elements, opinions, defenses and prosecutions.  The role of race in the history of Broadway has, I’m sure, never been more thoroughly or more judiciously explored. And it’s a terrific read.”
— Jack Viertel

"Warren Hoffman delivers a comprehensive and robust examination of the American musical as a purveyor of white identity and privilege. Easy to read and adept at elucidating the complexities of race in performance, The Great White Way is straightforward and unapologetic. Within it, Hoffman contextualizes the racial disparities embedded in the art form and acknowledges the musical’s powerful and irresistible place in the public imagination. This book belongs on the shelf of any theater maker or scholar who seeks to decolonize sites of theater production and pedagogy."

"This revised edition brings The Great White Way fully into the twenty-first century with an examination of jukebox musicals and the role of off-Broadway and regional theaters in the development of the American musical."
— Broadway World

"There have been musicals produced on Broadway that have had subject matter that reflect diversity but it is Hoffman’s analysis that Broadway has yet to fully embrace diversity or taking risks. It seems that the non-profit theatre companies are more likely to take such risks. Hoffman’s analysis is worth pondering.?"
— Mark Kappel Dance

"As ‘West Side Story’ returns to Broadway, it has a lot to say about race in America," by Warren Hoffman
https://www.washingtonpost.com/outlook/2020/02/20/west-side-story-returns-broadway-it-has-lot-say-about-race-america/
— Washington Post

"The Lost Origins of Broadway's West Side Story," an excerpt from The Great White Way
https://therevealer.org/the-lost-origins-of-broadways-west-side-story/
— The Revealer

This feature require that you enable JavaScript in your browser.
END_OF_DOCUMENT_TOKEN_TO_BE_REPLACED

END_OF_DOCUMENT_TOKEN_TO_BE_REPLACED

This feature require that you enable JavaScript in your browser.
END_OF_DOCUMENT_TOKEN_TO_BE_REPLACED