Show Them You're Good: Four Boys and the Quest for College (Paperback) 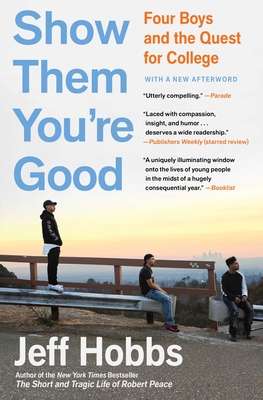 The acclaimed, award-winning author of The Short and Tragic Life of Robert Peace presents a “carefully observed journalistic account [that] widens our view of the modern ‘immigrant experience’” (The New York Times Book Review) as he closely follows four Los Angeles high school boys as they apply to college.

Four teenage boys are high school seniors at two very different schools within the city of Los Angeles, the second largest school district in the nation with nearly 700,000 students. In this “exceptional work of investigative journalism…laced with compassion, insight, and humor” (Publishers Weekly, starred review) Jeff Hobbs stunningly captures the challenges and triumphs of being a young person confronting the future—both their own and the cultures in which they live—in contemporary America.

Blending complex social issues with each individual experience, Hobbs takes us deep inside these boys’ worlds. The foursome includes Carlos, the younger son of undocumented delivery workers, who aims to follow in his older brother’s footsteps and attend an Ivy League college; Tio harbors serious ambitions to become an engineer despite a father who doesn’t believe in him; Jon, devoted member of the academic decathalon team, struggles to put distance between himself and his mother, who is suffocating him with her own expectations; and Owen, raised in a wealthy family, can’t get serious about academics but knows he must.

Including portraits of secondary characters—friends, peers, parents, teachers, and girlfriends—this “uniquely illuminating” (Booklist) masterwork of immersive journalism is destined to ignite conversations about class, race, expectations, cultural divides, and even the concept of fate. Hobbs’s portrayal of these young men is not only revelatory and relevant, but also moving, eloquent, and indelibly powerful.

Jeff Hobbs graduated with a BA in English language and literature from Yale in 2002, where he was awarded the Willets and Meeker prizes for his writing. He is the author of The Short and Tragic Life of Robert Peace, which won the Los Angeles Times Book Prize, Show Them You’re Good, and The Tourists. He lives in Los Angeles with his wife and two children.

“Hobbs’s carefully observed journalistic account…widens our view of the modern ‘immigrant experience’ to include that classic crucible: high school and college admissions…An admirable addition to the growing body of literature that humanizes the struggles and expands the scope of our understanding of the lives of immigrant youth.” —The New York Times Book Review

“[The] young men [in Hobbs's book are] smart and curious, alert to the absurdity of adult life, keenly aware of grownups’ hypocrisy, and determined not to be seen as clichés. They faced all the messy realities of life — illness, poverty, unreliable parents — and 'pushed ahead anyway, in the very best way.'” —Boston Globe

“[An] exceptional work of investigative journalism. . . . A stirring examination of life in LA, the country’s political landscape, the flaws of the American higher education system, and the rites of passage from boyhood into manhood. Laced with compassion, insight, and humor, this appealing study deserves a wide readership.” —Publishers Weekly, starred review

“With [Hobbs’s] fly-on-the-wall reporting style, life happens and the boys emerge fully themselves: driven, funny, sweet, wise, terrified, excited. A uniquely illuminating window onto the lives of young people in the midst of a hugely consequential year.” —Booklist

“Hobbs gained [the boys'] trust, so he was able to examine their motivations and private fears in a manner that reveals them as both unique and, in many ways, typical of their age, culture and place...Hobbs wisely does not draw conclusions, since life is for living and there is much on the horizon for his young protagonists.” —Bookreporter

“With extraordinary heart, grace, and empathy, Jeff Hobbs shines a bright light on the hopes and aspirations of four young men whose lives will profoundly move you. Enthralling and unforgettable, Show Them You’re Good is a deeply satisfying masterwork of nonfiction.”
—Gilbert King, Pulitzer Prize–winning author of Devil in the Grove

“Kudos to Jeff Hobbs for immersing himself in an experience that few of us would care to revisit. His sensitive, beautifully rendered portraits of nine boys at two LA high schools are full of humor and insight.”
—Mark Bowden, author of The Last Stone and Hue 1968

“This is a fascinating and engrossing look at America today that focuses on the pressures and inequalities of opportunity affecting high school students as they work to gain access to the best college they can afford. It’s also a book filled with joy, heartbreak, and love as we meet the parents, siblings, teachers, and friends who accompany these four on their journey from boys to men.”
—Will Schwalbe, New York Times bestselling author of The End of Your Life Book Club and Books for Living

“Show Them You’re Good is fair, painstakingly reported, suspenseful, ethical, and, above all, empathetic. Hobbs is obviously a remarkably good listener; these boys opened up to him because he earned their trust. The result was that he made me care—really care—about them.”
—Anne Fadiman, author of The Spirit Catches You and You Fall Down

“This book is such a deeply intimate and deeply moving coming-of-age story, one that wouldn’t let me go—and one that left me rooting for these boys, hoping that each of them finds their footing in the world. Once again, Jeff Hobbs has pulled off a remarkable triumph of empathy.”
—Alex Kotlowitz, author of An American Summer

This feature require that you enable JavaScript in your browser.
END_OF_DOCUMENT_TOKEN_TO_BE_REPLACED

END_OF_DOCUMENT_TOKEN_TO_BE_REPLACED

This feature require that you enable JavaScript in your browser.
END_OF_DOCUMENT_TOKEN_TO_BE_REPLACED