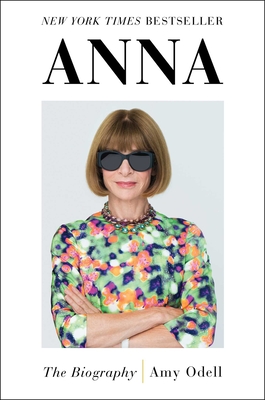 This definitive biography of Anna Wintour follows the steep climb of an ambitious young woman who would—with singular and legendary focus—become one of the most powerful people in media.

As a child, Anna Wintour was a tomboy with no apparent interest in clothing but, seduced by the miniskirts and bob haircuts of swinging 1960s London, she grew into a fashion-obsessed teenager. Her father, an influential newspaper editor, loomed large in her life, and once he decided she should become editor-in-chief of Vogue, she never looked back.

Impatient to start her career, she left high school and got a job at a trendy boutique in London—an experience that would be the first of many defeats. Undeterred, she found work in the competitive world of magazines, eventually embarking on a journey to New York and a battle to ascend, no matter who or what stood in her way. Once she was crowned editor-in-chief of Vogue—in one of the stormiest transitions in fashion magazine history—she continued the fight to retain her enviable position, ultimately rising to dominate all of Condé Nast.

Based on extensive interviews with Anna Wintour’s closest friends and collaborators, including some of the biggest names in fashion, journalist Amy Odell has crafted the most revealing portrait of Wintour ever published. Weaving Anna’s personal story into a larger narrative about the hierarchical dynamics of the fashion industry and the complex world of Condé Nast, Anna charts the relentless ambition of the woman who would become an icon.

Amy Odell is a fashion and culture journalist. Her work has appeared in New York magazine, The Economist’s 1843, Bloomberg Businessweek, and numerous other publications. She is the author of Anna and Tales from the Back Row. Find out more at AmyOdell.com.

“A wealth of delightful details…Odell’s insights into how fashion magazines work (or worked) are fascinating….You’ll walk away knowing every step—and misstep—in Wintour’s famous ascent to the heights of magazinedom.”
—The New York Times

“Amy Odell’s new book is a wonderful romp through Wintour’s world: couture at its juiciest. But it is more than that: an intimate guide to how the queen of fashion built and manages her magic kingdom.”
—The Washington Post

“A dissection of one of fashion’s most controversial figures and a window into the glossy pages of Vogue, Amy Odell’s definitive Anna Wintour bio balances criticism with understanding and stories of true sadism: Imagine telling Oprah to lose 20 pounds for a cover.”
—Rolling Stone

“Having interviewed over 250 sources (many of whom are unforgettable and quotable characters themselves)… Odell takes readers through Wintour's lifelong love of fashion, her personal life and romantic relationships, and, primarily, her decades-long career... While Odell's nimble writing moves at a clip, the extent and detail here make this perfect for fashion devotees and fans of publishing industry tales as Anna's career coincides with sea changes in magazine journalism.”
—Booklist, Starred review

“The secret to [Anna’s] longevity is the subject of Odell’s biography, which is drawn from interviews with Wintour’s tightknit inner circle. Given that she’s famously private and notoriously aloof, the participation of intimates in the book’s reporting indicates a green light from Wintour herself. But Odell is unsparing, detailing Wintour’s ambitious rise and ruthless power grabs, dotting the narrative with a healthy amount of gossip and color.”
—Bloomberg Businessweek

“What scintillates…are the intimate details about a famously inscrutable subject…as well as the blunt treatment of Wintour’s more problematic sides…. [a] fascinating look at an enigmatic figure.”
–Publisher’s Weekly

“The most comprehensive biography of the media icon… [Anna] fascinates with Odell’s well-documented account of Wintour’s broad influence.”
—Library Journal

Anna: The Biography pulls off a rare feat. It’s a comprehensive and balanced look at Wintour’s long, storied, and often controversial career, but it’s also a great read.
— Texas Monthly

“[A] stunningly thorough, balanced, humanizing portrait of the most powerful woman working in fashion, and one of the most powerful business leaders in America…. After speaking with over 250 sources and poring over letters and magazines, Odell gives us countless juicier, more illuminating details to gobble up.”
—The Cut

“A highly detailed and revelatory portrait of a very private figure.”
—CNN.com

“A fascinating portrait of the secretive queen of fashion. The devil is in the detail.”
–Andrew Morton, New York Times bestselling author of Diana: Her True Story

“The details of Anna Wintour’s life have been kept as tantalizingly hidden as her eyes behind her trademark sunglasses. This book tells her stunning story. Extraordinarily sweeping, astute, and unputdownable.”
—Sheila Weller, New York Times bestselling author of Carrie Fisher: A Life on the Edge and Girls Like Us

“Anna is brilliantly written and well-researched, full of the kinds of details you've always wanted to know about Wintour's early life, and the ways in which she used her considerable gifts to amass astonishing, and enduring, power and influence.”
—Laurie Woolever, author of Bourdain, The Definitive Oral Biography

“Anna serves up Wintour A to Z, in page-turning detail. A dazzling and exhaustive deep dive into the ruthless, glittering world of fashion media and one of its most iconic empresses.”
—Lisa Napoli, Author of Susan, Linda, Nina, & Cokie: The Extraordinary Story of the Founding Mothers of NPR

“Odell takes her readers behind Wintour’s iconic bob and sunglasses in this deeply researched account, delivering a close-up view of the most powerful woman in fashion.”
—Sara Gay Forden, author of House of Gucci: A True Story of Murder, Madness, Glamor and Greed

This feature require that you enable JavaScript in your browser.
END_OF_DOCUMENT_TOKEN_TO_BE_REPLACED

END_OF_DOCUMENT_TOKEN_TO_BE_REPLACED

This feature require that you enable JavaScript in your browser.
END_OF_DOCUMENT_TOKEN_TO_BE_REPLACED