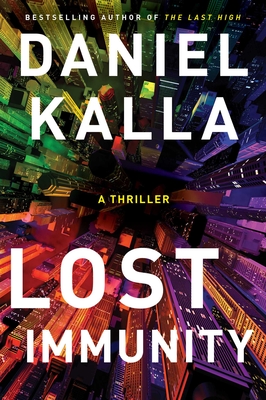 An ordinary day
The city of Seattle is stunned when a deadly bacteria tears through a nearby Bible camp. Early tests reveal the illness is a form of meningitis, and the camp’s residents are among its most vulnerable victims: children and teenagers.

A new vaccine
Facing a rapidly rising death rate, Seattle’s chief public health officer, Lisa Dyer, and her team quickly take all steps necessary to contain the devastating outbreak. And when further testing reveals that the strain of the bacteria is one that caused catastrophic losses in Iceland six months before, Lisa decides to take a drastic step: she contacts Nathan Hull, vice president of a pharmaceutical company that is doing final-phase trials on a viable vaccine, and asks him to release it early for use on the city’s population.

An epidemic in the making
Lisa gets the go-ahead on her controversial plan, despite the protests of dubious government officials, anti-vaxxers, and even those on her own team. Vaccine clinics roll out across the city, and the risky strategy appears to be working, leaving Lisa, Nathan, and thousands of others breathing a sigh of relief. Until people start dying from mysterious and horrific causes—and the vaccine itself is implicated.

But what if science isn’t to blame?

Daniel Kalla is the internationally bestselling author of novels including Lost Immunity, The Last High, and We All Fall Down. Kalla practices emergency medicine in Vancouver, British Columbia. Visit him at DanielKalla.com or follow him on Twitter @DanielKalla.

“Kalla ratchets up the suspense as a cover-up is exposed . . . a truly scary scenario from a writer who knows his medical thriller lingo down to the final line.”
— The Globe and Mail

“A fast-paced, fact-filled medical thriller that reads like the anatomy of an epidemic . . . also a fine tribute to the dedicated public officials and front line workers who put everything on the line towards the race to eradicate a quickly spreading epidemic.”
— Montreal Times

“Always there to hold up a mirror to society—his last book, The Last High, took on the opioid crisis—Kalla’s new Lost Immunity book sits smack dab in the middle of what the world has been going through for the last year.”
— Vancouver Sun

Praise for The Last High

“Kalla has long had his stethoscope on the heartbeat of his times. . . . In his latest, the focus is on Vancouver’s opioid crisis. . . . [A] lively story.”
— Toronto Star

“A thrilling, front-line drama about the opioid crisis.”
— KATHY REICHS, bestselling author of the Bones series

“If you want an engrossing, edge-of-your-seat thriller that combines good detective work, corruption, savage criminal practices, a dark, seamy portrait of a large Canadian city, and a hard-hitting lesson on the medical and emotional effects of opioid drugs, then The Last High certainly fills that prescription.”
— Montreal Times

“Kalla is terrific at building suspense as the case progresses, uncovering a web of dealers, sellers, and users.”
— The Globe and Mail

“A riveting thriller, The Last High features the most evil and insidious of villains: opioids. This important, must-read book is not only well-researched and entirely realistic, it gives a human face to a devastating epidemic.”
— ROBYN HARDING, #1 bestselling author of The Swap

“A sobering glimpse into the drug overdose crisis. . . . An entertaining, if slightly eerie read.”
— Vancouver Sun

This feature require that you enable JavaScript in your browser.
END_OF_DOCUMENT_TOKEN_TO_BE_REPLACED

END_OF_DOCUMENT_TOKEN_TO_BE_REPLACED

This feature require that you enable JavaScript in your browser.
END_OF_DOCUMENT_TOKEN_TO_BE_REPLACED