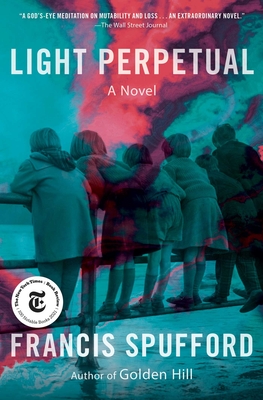 Named a Best Book of the Year by The New York Times, NPR, Slate, Lit Hub, Fresh Air, and more

From the critically acclaimed and award‑winning author of Golden Hill, an “extraordinary…symphonic…casually stunning” (The Wall Street Journal) novel tracing the infinite possibilities of five lives in the bustling neighborhoods of 20th-century London.

Lunchtime on a Saturday, 1944: the Woolworths on Bexford High Street in South London receives a delivery of aluminum saucepans. A crowd gathers to see the first new metal in ages—after all, everything’s been melted down for the war effort. An instant later, the crowd is gone; incinerated. Among the shoppers were five young children.

Who were they? What futures did they lose? This brilliantly constructed novel, inspired by real events, lets an alternative reel of time run, imagining the lives of these five souls as they live through the extraordinary, unimaginable changes of the bustling immensity of twentieth-century London. Their intimate everyday dramas, as sons and daughters, spouses, parents, grandparents; as the separated, the remarried, the bereaved. Through decades of social, sexual, and technological transformation, as bus conductors and landlords, as swindlers and teachers, patients and inmates. Days of personal triumphs and disasters; of second chances and redemption.

Ingenious and profound, full of warmth and beauty, Light Perpetual “offers a moving view of how people confront the gap between their expectations and their reality” (The New Yorker) and illuminates the shapes of experience, the extraordinariness of the ordinary, the mysteries of memory, and the preciousness of life.

Francis Spufford is the author of five highly praised books of nonfiction. His first book, I May Be Some Time, won the Writers’ Guild Award for Best Nonfiction Book of 1996, the Banff Mountain Book Prize, and a Somerset Maugham Award. It was followed by The Child That Books Built, Backroom Boys, Red Plenty (which was translated into nine languages), and most recently, Unapologetic. His first novel, Golden Hill, won the Costa First Novel Award. In 2007 he was elected a Fellow of the Royal Society of Literature. He teaches writing at Goldsmiths College and lives near Cambridge. His most recent novel is Light Perpetual.

"A God’s-eye meditation on mutability and loss. . . . an extraordinary novel in terms of its variety of character, symphonic language and spiritual reach. . . . [Spufford is] such a beautiful writer, casually stunning in his language and perceptions. . . . Light Perpetual is a miracle, not only of art but of encompassing empathy.” —Maureen Corrigan, The Wall Street Journal

"Offers a moving view of how people confront the gap between their expectations and their reality." —The New Yorker

"Heady, vivid, ecstatically precise. . . . uncannily good. . . . Light Perpetual is the sort of novel that’s carried by its descriptions, passages that transform the ordinary into the transcendent and leave us marveling.” —Laura Miller, Slate

“Just finished Light Perpetual by Francis Spufford. My God he can write. And one of the best opening chapters and closing chapters you'll ever read.”—Richard Osman, author of The Thursday Murder Club and The Man Who Died Twice

"Spufford’s storytelling is beautiful, paced, and engaging. . . . [He] makes the case that all lives are inherently interesting if we look at them closely enough." —Lit Hub, "Our Favorite Books of 2021"

“[A] richly imagined mosaic. . . . [T]he characters are complex, engaging, memorable. Spufford does indeed bring them to life. He also brings depth and detail to every vignette, from a boy’s view of soccer to hot-lead typesetting, a neo-Nazi concert, or a trip on a double-decker bus. . . . Entertaining and unconventional.” —Kirkus Reviews, STARRED review

“Graceful. . . . Light Perpetual derives considerable power from dramatizing the experiences its characters missed: the chance to build and lose a fortune, to see one’s dreams realized or else rerouted toward more modest achievements, or just to hold a loved one’s hand." —BookPage, STARRED review

"Five children die in 1944, but imagined glimpses of their unlived lives generate powerful moments of reflection and redemption... Spufford’s second novel swells with the same lively, intimate prose as his celebrated debut, The Golden Hill (2017). But its unconventional framing and larger, more contemporary themes makes it an even stronger book." —Booklist, STARRED review

"Spufford has the compassion, wit, and moral sense of a C.S. Lewis, and the literary dazzle and inventiveness of a David Mitchell. Is this the book of the year? I thought so.” —Joe Hill

“I was reminded of the death-defying bent of two other recent novels—Kate Atkinson’s Life After Life and Paul Auster’s 4 3 2 1 — both of which share with Light Perpetual a kind of radiant goodness, a sense that the world is a better place for having such books within them…. Light Perpetual’s brilliance lies in the emotion and drama it wrings from the ordinary—but profoundly meaningful—experiences of its protagonists.” —Financial Times

“With bold metaphysical engineering, the Golden Hill author conjures miraculous everyday existence…Light Perpetual is something new and brave. With exceptional care, with a loving shrewdness that’s a little Hogarthian, Spufford catches the voices and hopes of five not-dead working-class south Londoners, and the people who change and shape them.” —The Guardian

“Radiant with hope and grace and courage . . . I loved it.” —Sarah Perry, author of The Essex Serpent

“Dazzling ... [Spufford is] one of the finest prose stylists of his generation. If his stories grip, his sentences practically glow.”  —The Times (UK)

This feature require that you enable JavaScript in your browser.
END_OF_DOCUMENT_TOKEN_TO_BE_REPLACED

END_OF_DOCUMENT_TOKEN_TO_BE_REPLACED

This feature require that you enable JavaScript in your browser.
END_OF_DOCUMENT_TOKEN_TO_BE_REPLACED