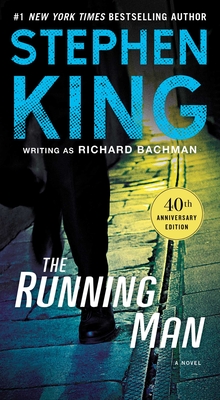 A desperate man attempts to win a reality TV game where the only objective is to stay alive in this #1 national bestseller from Stephen King, writing as Richard Bachman. “Under any name King mesmerizes the reader” (Chicago Sun-Times).

Ben Richards is a desperate man. With no job, no money, no way out, and a young daughter in need of proper medical attention, he must turn to the only possibility of striking it rich in this near-future dystopian America: participating in the ultra-violent TV programming of the government-sanctioned Games Network. Ben soon finds himself selected as a contestant on the biggest and the best that the Games Network has to offer: “The Running Man,” a no-holds-barred thirty-day struggle to stay alive as public enemy number one, relentlessly hunted by an elite strike force bent on killing him as quickly as possible in front of an audience all too eager to see that happen. It means a billion dollars in prize money if he can live for the next month. No one has ever survived longer than eight days. But desperation can push a person do things they never thought possible—and Ben Richards is willing to go the distance in this ultimate game of life and death...

This feature require that you enable JavaScript in your browser.
END_OF_DOCUMENT_TOKEN_TO_BE_REPLACED

END_OF_DOCUMENT_TOKEN_TO_BE_REPLACED

This feature require that you enable JavaScript in your browser.
END_OF_DOCUMENT_TOKEN_TO_BE_REPLACED