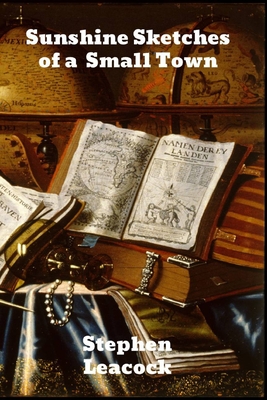 Sunshine Sketches of a Little Town is a sequence of stories by Stephen Leacock, first published in 1912. It is generally considered to be one of the most enduring classics of Canadian humorous literature. The fictional setting for these stories is Mariposa, a small town on the shore of Lake Wissanotti. Although drawn from his experiences in Orillia, Ontario, Leacock notes: "Mariposa is not a real town. On the contrary, it is about seventy or eighty of them. You may find them all the way from Lake Superior to the sea, with the same square streets and the same maple trees and the same churches and hotels."

This work has remained popular for its universal appeal. Many of the characters, though modelled on townspeople of Orillia, are small town archetypes. Their shortcomings and weaknesses are presented in a humorous but affectionate way. Often, the narrator exaggerates the importance of the events in Mariposa compared to the rest of the world. For example, when there is a country-wide election, "the town of Mariposa, was, of course, the storm centre and focus point of the whole turmoil."

The story of the steamboat Mariposa Belle sinking in Lake Wissanotti is one of the best-loved in the set. The apparent magnitude of this accident is lessened somewhat when it is revealed that the depth of the water is less than six feet. Men from the town come to the rescue in an un-seaworthy lifeboat which sinks beneath them just as they are pulled onto the steamer, and the narrator earnestly remarks that this was "one of the smartest pieces of rescue work ever seen on the lake."

In 1923, George Locke commented in the New York Evening Post that library students had chosen the book as one of a dozen "...books of prose fiction would best represent the works of Canadian authors to readers who wish to know something of Canadian life". 1]

The book, along with the Champlain statue in Couchiching Beach Park on Lake Couchiching, were used in tourist promotions for the town as proof of Orillia's civic pride in the decades following the 1925 Dominion Day celebrations.

This feature require that you enable JavaScript in your browser.
END_OF_DOCUMENT_TOKEN_TO_BE_REPLACED

END_OF_DOCUMENT_TOKEN_TO_BE_REPLACED

This feature require that you enable JavaScript in your browser.
END_OF_DOCUMENT_TOKEN_TO_BE_REPLACED