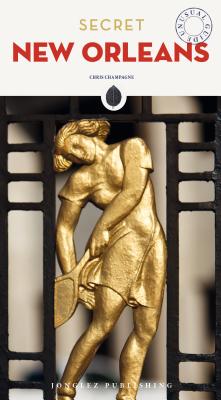 Houses built to resemble riverboats, the finest business hall in the world, a meteorite in a golf course, a back alley that serves as a portal of the voodoo afterwold, a 1960's time capsule, a house made of 1200 glass ashtrays, Lee Harvey Oswald forgotten Commemorative Plate, a secret doll museum on the second floor of a private house, the largest religious work of art on canvas in the world ... Far from the crowds and the usual clich's, New Orleans offers countless off-beat experiences and is home to any number of well-hidden treasures that are revealed only to residents and travellers who find their way off the beaten track. An indispensable guide for those who thought they knew New Orleans well or would like to discover the other face of the city. *Secret New Orleans won a Bronze Medal in the 'Travel Guidebook' category at the Independent Publisher Book Awards competition, USA, 2018*

A lifelong resident of New Orleans, Chris Champagne is a graduate of the Orleans Parish School system and of the University of New Orleans with a BA in History. He is a writer, performer, poet, comedian, political satirist, radio show host and columnist who has performed his work on stages all over the Greater New Orleans area. He was voted one of 144 New Orleans Characters in 2012 and was voted best comedian in New Orleans in 2013 and 2014. He was a member of National Poetry Slam teams in San Francisco in 1993 and Chicago in 1999. He received artists' residencies from the Alliance of Artists in 2006 and The College of Santa Fe in 2008. Chris is the author of the poetry book Roach Opera {Portals Press 2007}, and The Yat Dictionary [Lavender Ink, 2013}, a book on the dialect spoken by native Orleanians. His family on both sides has resided in New Orleans continuously since the first half of the 18th century.

This feature require that you enable JavaScript in your browser.
END_OF_DOCUMENT_TOKEN_TO_BE_REPLACED

END_OF_DOCUMENT_TOKEN_TO_BE_REPLACED

This feature require that you enable JavaScript in your browser.
END_OF_DOCUMENT_TOKEN_TO_BE_REPLACED