Influence of nitrogen source on fermentation and higher alcohol production by an industrial strain of Saccharomyces cerevisiae: The Isoleucine case (Paperback) 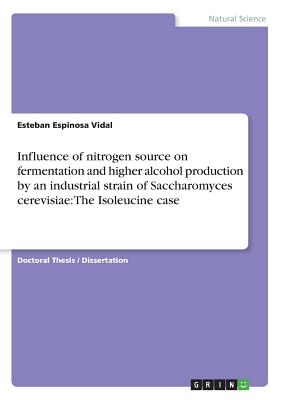 Doctoral Thesis / Dissertation from the year 2012 in the subject Biology - Genetics / Gene Technology, Federal Rural University of Pernambuco (Institut National des Sciences Appliqu es), course: Genetics, language: English, abstract: During the fermentation process, the yeast Saccharomyces cerevisiae produces a series of organoleptic compounds of interest in the alcoholic beverages background, among which outstanding the higher alcohols. Its formation depends on many factors, being the source and nitrogen concentration one of the most important. Recently, in industrial and artisanal cacha a stills, it has been common the addition of ammonium salts to improve the fermentation performance, however there are scarce information about this practice in the organoleptic background. Considering this, we analyzed the fermentative profile, the transcriptomic levels and higher alcohols production with the aim of determine the nitrogen effect in the formation of higher alcohols, and consequently in the flavour profile. To achieve this, it was employed an industrial strain of S. cerevisiae JP1, used in the production of bioethanol and cacha a, in mineral medium cultures with different nitrogen sources in the form of ammonium (as sulfate salt), leucine, isoleucine, valine, tryptophan and phenylalanine. The production of higher alcohols reached levels between 300 to 1000 mg/L in the amino acid cultures, while in medium with ammonium supplementation the production was limited (8 mg/L). In addition, was also observed a significant accumulation of higher alcohols other than the expected for a specific amino acid. Consequently, was corroborated the catabolism of branched and aromatic amino acids mainly follows the Ehrlich pathway, with the novelty that not expected higher alcohols could be produced in elevate amino acid concentration condition, caused probably a leakage of valine and leucine due to the overflow of amino acid catabolism/anabolism. Analysis of gene transcription and.

Esteban Espinosa Vidal was born in Mar del Plata, Buenos Aires, Argentina, on the 5 td of February 1974. He attended the National Media Education School and matriculated in 1991. In 2000, he worked for one year in the Molecular breeding Laboratory at Monsanto Company. In 2004, he obtained a degree in Biological Sciences with specialized in Molecular Biology from the National Mar del Plata University. Esteban obtained a Master degree of Science in Genetic from Federal University of Pernambuco (UFPE) in 2008, and a Doctor degree of Science in Genetic from the same institution (UFPE) in 2012. Actually, he is working in his Post-Doctorate in the Centre for Strategic Technologies of Northeast (CETENE/MCTI), where he coordinates the Bioprocess laboratory, the Phytoquimic and chemical process laboratory and the Analytical Central laboratory from 2013. He belongs to the Interdepartmental research group of metabolic Metabolic Engineering of the UFPE (NEM) and he is the leader of the Research Groups in Biotechnology White (GBioB) and the Group for Research and Development of Analytical Methods (NPDMA). He is a member of Science and Technology Commission of CETENE/MCTI from 2014. His principal interest involves nitrogen metabolism, higher alcohols and ester metabolism production, microorganism biodiversity, physiology and improvement of industrial yeasts for first and second ethanol production, yeast gene expression and regulation analysis, and purification, identification and quantification of active compounds. He has experience in the area of molecular biology, fermentation, physiology of industrial microorganisms, in gene expression analysis, and in the identification and quantification of metabolites by high performance chromatography and mass spectrometry.

This feature require that you enable JavaScript in your browser.
END_OF_DOCUMENT_TOKEN_TO_BE_REPLACED

END_OF_DOCUMENT_TOKEN_TO_BE_REPLACED

This feature require that you enable JavaScript in your browser.
END_OF_DOCUMENT_TOKEN_TO_BE_REPLACED