Gorillas in the Mist (Paperback) 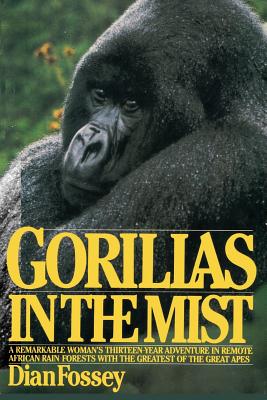 Dr. Dian Fossey, the world authority on the endangered mountain gorilla, combines her riveting personal adventure story with fascinating scientific reporting in this landmark book on the greatest of the great apes. Gorillas in the Mist documents one of the longest field studies of primates, as it covers fifteen years, four gorilla families and three generations in the remote rain forests of the volcanic Virunga Mountains shared by Zaire, Rwanda and Uganda. One of our closest primate relatives, gorillas form tight kinship bonds, which can sustain these close knit families for generations. These shy, gentile vegetarians (who occasionally eat grubs for protein) live in a group headed by a dominant male, called a silver-back, and roam a rugged age-old environment between 9,000 feet and 13,000 feet above sea level. Working alone from a base camp 10,000 feet above sea level, Diane Fossey struggled with acrophobia on 45-degree slopes, torrential rains, hail and fog, foot-deep mud, poachers, gorilla slaughters, witchcraft and revolution. Gaining gorilla acceptance of her presence took years of acting submissively while she imitated feeding and contentment sounds. Dian Fossey made history when a male gorilla reached out to touch her. Fossey's enthralling account of four family groups contains some extra-ordinary characters: little elf-eared Icarus, who in fifteen years becomes a powerful silverback ready to inherit his natal family's leadership; his 350-pound father, Beethoven, who is as forceful in controlling his family during interactions with neighboring groups as he is gentle in grooming his tiny offspring; Coco and Pucker, tragically orphaned babies who taught the author much about gorilla life and people's attitudes towards conservation; Old Goat, the dominant female who helped the family survive the traumatic adjustment to a new leader; Uncle Bert, the young silverback who learned how to keep his group together and handle responsibilities of leadership and Digit the young male whose lack of peers attracted him to human observers and who became the author's special friend. In 1977 the slaughter of Digit by poachers brought the mountain gorilla's plight to international prominence and Diane Fossey into the limelight as she worked to insure a future for the rain forest and the few hundred gorillas that remained within it. In Gorillas in the Mist, Dr. Fossey confronts head on the complexities of effective conservation of a delicate system on which people depend as much as do wildlife for survival. Scientific appendixes address such topics as census findings, gorilla food types, common vocalizations, autopsies and parasitology reports. The bibliography on the species in the most extensive in print.

This feature require that you enable JavaScript in your browser.
END_OF_DOCUMENT_TOKEN_TO_BE_REPLACED

END_OF_DOCUMENT_TOKEN_TO_BE_REPLACED

This feature require that you enable JavaScript in your browser.
END_OF_DOCUMENT_TOKEN_TO_BE_REPLACED