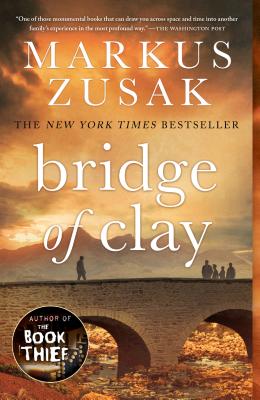 Bridge of Clay by Markus Zusak

The breathtaking story of five brothers who bring each other up in a world run by their own rules. As the Dunbar boys love and fight and learn to reckon with the adult world, they discover the moving secret behind their father’s disappearance. At the center of the Dunbar family is Clay, a boy who will build a bridge—for his family, for his past, for greatness, for his sins, for a miracle. The question is, how far is Clay willing to go? And how much can he overcome? Written in powerfully inventive language and bursting with heart, BRIDGE OF CLAY is signature Zusak.

Markus Zusak is the international bestselling author of six novels, including The Book Thief and most recently, Bridge of Clay. His work is translated into more than forty languages, and has spent more than a decade on the New York Times bestseller list, establishing Zusak as one of the most successful authors to come out of Australia. All of Zusak’s books – including earlier titles, The Underdog, Fighting Ruben Wolfe, When Dogs Cry (also titled Getting the Girl), and The Messenger (or I am the Messenger) – have been awarded numerous honors around the world, ranging from literary prizes to readers choice awards to prizes voted on by booksellers.In 2013, The Book Thief was made into a major motion picture, and in 2018 was voted one of America’s all-time favorite books, achieving the 14th position on the PBS Great American Read. Also in 2018, Bridge of Clay was selected as a best book of the year in publications ranging from Entertainment Weekly to the Wall Street Journal. Markus Zusak grew up in Sydney, Australia, and still lives there with his wife and two children.