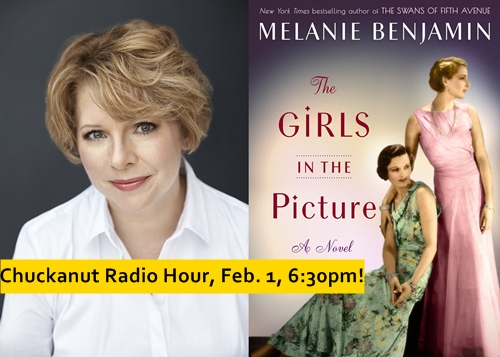 It is 1914, and twenty-five-year-old Frances Marion has left her (second) husband and her Northern California home for the lure of Los Angeles, where she is determined to live independently as an artist. But the word on everyone's lips these days is "flickers"—the silent moving pictures enthralling theatergoers. Turn any corner in this burgeoning town and you'll find made-up actors running around, as a movie camera captures it all.

In this fledgling industry, Frances finds her true calling: writing stories for this wondrous new medium. She also makes the acquaintance of actress Mary Pickford, whose signature golden curls and lively spirit have given her the title of America's Sweetheart. The two ambitious young women hit it off instantly, their kinship fomented by their mutual fever to create, to move audiences to a frenzy, to start a revolution. But their ambitions are challenged both by the men around them and the limitations imposed on their gender—and their astronomical success could come at a price.

Melanie Benjamin is the author of the New York Times bestselling novels The Swans of 5th Avenue and The Aviator’s Wife, as well as national bestseller Alice I Have Been and The Autobiography of Mrs. Tom Thumb. She lives in the Chicago area with her husband and is currently at work on her next historical novel. She will be interviewed by Lindsey Gerhard, Marketing Manager at the Pickford Film Center with live music from Cellists Coral Marchant & David Jones.

Radio Hour, a recipient of Bellingham's prestigious Mayor's Arts Award, is a radio variety show that began in January 2007. Each Chuckanut Radio Hour includes guest authors, musicians, performance poet Kevin Murphy, and episodes of "As the Ham Turns" serial radio comedy, not to mention groaner jokes by hosts Chuck & Dee Robinson and announcer Rich Donnelly. The Chuckanut Radio Hour's first guest was Erik Larson and has since included Alexander McCall Smith, Elizabeth George, Cheryl Strayed, Sherman Alexie, Tom Robbins and Garrison Keillor, among many others. Tickets for the Chuckanut Radio Hour are $5 and are available at Village Books and BrownPaperTickets.com. Receive a free ticket with pre-purchase of The Girls in the Picture (OR if you've already bought the book, with each paid ticket you'll receive a $5 voucher to spend on Village Books merchandise at the show). The Radio Hour airs every Friday at 7am, Saturday evening at 7pm and Sunday at 9pm on SPARK RADIO, KMRE 102.3FM.  Co-sponsored by the Whatcom Community College Community and Continuing Education, 12th Street Shoes, the Pickford Film Center, and Westside Pizza.

The Girls in the Picture: A Novel (Hardcover)