Booked at the Baker Presents An Evening with Louise Penny, A Better Man 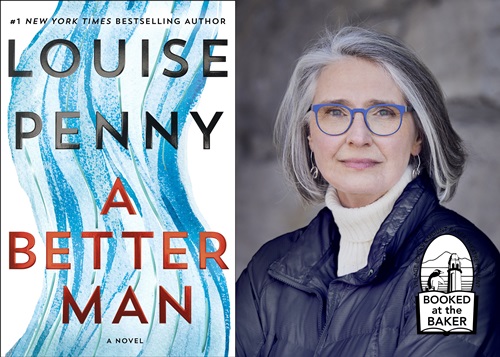 Part of the Booked At The Baker Series! At the Mount Baker Theatre, 104 N. Commercial Street

Tickets are available at the Mount Baker Theatre Box Office, or online at MountBakerTheatre.com.

It’s Gamache’s first day back as head of the homicide department, a job he temporarily shares with his previous second-in-command, Jean-Guy Beauvoir.  Flood waters are rising across the province. In the middle of the turmoil a father approaches Gamache, pleading for help in finding his daughter.

As crisis piles upon crisis, Gamache tries to hold off the encroaching chaos, and realizes the search for Vivienne Godin should be abandoned.  But with a daughter of his own, he finds himself developing a profound, and perhaps unwise, empathy for her distraught father. Increasingly hounded by the question, how would you feel…, he resumes the search. As the rivers rise, and the social media onslaught against Gamache becomes crueler, a body is discovered.  And in the tumult, mistakes are made.

In the next novel in this “constantly surprising series that deepens and darkens as it evolves” (New York Times Book Review), Gamache must face a horrific possibility, and a burning question.

What would you do if your child’s killer walked free?

Louise Penny, a former CBC radio journalist, is the #1 New York Times and Globe and Mail bestselling author of the Chief Inspector Armand Gamache novels. She has been awarded the CWA Dagger, Nero, Macavity and Barry Awards, as well as two each of the Arthur Ellis and Dilys Awards. In addition, she has won the Agatha Award (seven times), and was a finalist for the Edgar Award for Best Novel. In 2017, she received the Order of Canada for her contributions to Canadian culture. Louise Penny lives in a small village south of Montréal.

Village Books is proud to present Louise Penny in partnership with the Mount Baker Theatre, as part of our Booked at the Baker series. Tickets are available at the Mount Baker Theatre Box Office, or online at mountbakertheatre.com and come with a signed copy of A Better Man! Tickets are subject to applicable fees. Doors at 6pm, show starts at 7pm.

A percentage of sales will be donated to support the launch of the Whatcom Museum’s new program, Museum in Mind: Enrichment for People Experiencing Memory Loss. The program provides access to museum experiences in art for adults with dementia and their caregivers.

Kingdom of the Blind: A Chief Inspector Gamache Novel (Hardcover)

A Rule Against Murder: A Chief Inspector Gamache Novel (Paperback)

A Trick of the Light: A Chief Inspector Gamache Novel (Paperback)

How the Light Gets In: A Chief Inspector Gamache Novel (Paperback)

The Nature of the Beast: A Chief Inspector Gamache Novel (Paperback)