Brian Payton, The Wind Is Not A River—Fiction 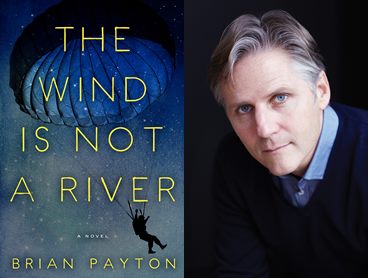 Brian Payton’s breathtaking novel The Wind Is Not A River, is a gripping tale of survival and an epic love story in which a husband and wife, separated by the only battle of World War II to take place on American soil, fight to reunite in Alaska’s starkly beautiful Aleutian Islands.

Struggling with the loss of his younger brother in Europe, journalist John Easley leaves behind his beloved wife Helen and heads north from Seattle to investigate the Japanese invasion of Alaska’s Aleutian Islands. Although censored by the government, John is determined to report on the battles that are taking place on American soil where thousands of men are stationed and where hundreds have been displaced from their home. While accompanying a crew on a bombing run, John’s plane is shot down over the island of Attu. One of two survivors, he must fight the elements of a harsh and unforgiving wilderness, starvation, and his own remorse while evading discovery by the Japanese. Meanwhile, alone in their home 3,000 miles to the south, a headstrong Helen struggles with the burden of her husband’s disappearance. Somehow, she must find John and bring him home. Joining a USO troupe assigned to Alaska she starts out on a quest that takes her into the farthest reaches of the war, beyond the safety of everything she knows.

Brian Payton has written for the New York Times, the Los Angeles Times, the Chicago Tribune, and the Boston Globe. He is the author of Shadow of the Bear: Travels in Vanishing Wilderness, which was chosen as a Barnes and Noble Book Club Pick, a Pearl’s Pick on NPR, and a 2006 National Outdoor Book Awards Book of the Year. The Ice Passage: A True Story of Ambition, Disaster, and Endurance in the Arctic Wilderness and his novel Hail Mary Corner were published to acclaim in Canada. He lives with his family in Vancouver, BC.
Books:

The Wind Is Not a River (Hardcover)

The Wind Is Not a River (Kobo eBook)

The Ice Passage: A True Story of Ambition, Disaster, and Endurance in the Arctic Wilderness (Paperback)