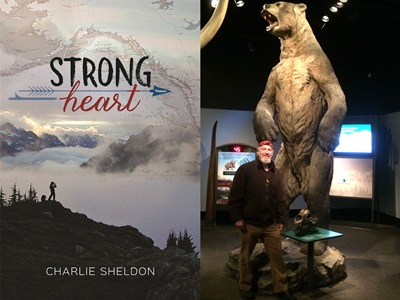 Deep in the Olympic Peninsula wilderness, 13 year old Sarah Cooley takes a wrong step. What happens next is impossible. A sea adventure, a journey through Olympic National Park, an adventure through time. Strong Heart, a breathtaking celebration of the wild Northwest and North Pacific, startles, yet challenges us to think.

Charlie Sheldon studied at Yale University and the University of Massachusetts, where he received a Master’s Degree in Wildlife Biology and Resource Management.  He then went to sea as a commercial fisherman off New England, fishing for cod, haddock, hake, lobster, red crab, squid, and swordfish. Active in the fight for the 200-mile Fisheries Conservation Zone, he later worked as a consultant for Fishery Management Councils, developing fishery management plans and then engaging in gear development projects to develop more selective fisheries. He spent 28 years working for seaports (New York, Seattle, and Bellingham, WA) as a project and construction manager and later as an executive, including habitat cleanup projects and working with Puget Sound Tribes to reduce tribal fishing conflicts. In 2012, age 65, he returned to sea, shipping out with the Sailor’s Union of the Pacific as an Ordinary Seaman, Able Bodied Seaman, and Bosun. Starting with commercial container vessels, on the New York to Singapore run, he finished his career aboard naval ships for Military Sealift Command. His last gig was as bosun aboard USNS Shughart, New Orleans to New York, in 2016, in his 70th year. Always a writer, he published Fat Chance with Felony and Mayhem Press in 2005. He began working on ideas for Strong Heart long, long ago and began serious research in 2010. These days he hikes in the Olympics whenever he can, cooks for his wife, and continues to write tales in Ballard, Washington.